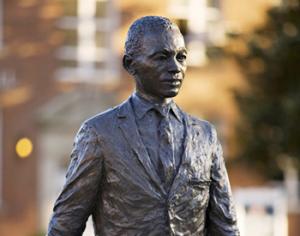 After the statue commemorating his admission to Ole Miss, James Meredith felt that the act was simply "foolish". Photo credit: espn.go.com

James Meredith – the man who integrated the University of Mississippi in 1962 – says black students should not be discouraged from attending Ole Miss beause of the the recent desecration of a statue of him on campus.

Meredith said Friday that it was "foolish" for anyone to leave a noose and an old Georgia state flag with a prominent Confederate emblem, WDAM-TV reported. The items were found Feb. 16 on the statute near the university's main administration building on the Oxford campus.

"Teenagers have been committing pranks and doing foolish things forever, and blacks will be out of their minds if they were planning on going to Ole Miss and let this distraction turn them away," said Meredith, who spoke Friday at a black history program in the south Mississippi town of Lumberton. 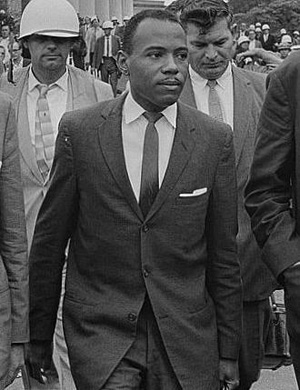 Three Ole Miss freshmen from Georgia have been kicked out of their fraternity after the items were found on the statue. University spokesman Danny Blanton said the school would move forward "as soon as possible" with discipline through the student judicial process. That panel of faculty members and students could choose sanctions, including dismissal and barring the three from campus, Blanton said.

When Meredith obtained a court order to enroll as the first black student at Ole Miss in the fall of 1962, Mississippi's governor tried to stop him. That led to violence on the Oxford campus.

U.S. Attorney General Robert Kennedy sent 500 U.S. marshals to take control and days later, Meredith was allowed in the school. Though he faced harassment, he graduated with a degree in political science.

During the speech in Lumberton on Friday, Meredith also talked about the importance of education for minority students and said churches should play a more important role in helping to raise black children.

I'm surprised that universities do not have an approval system for deciding what themes fraternities are allowed for their parties. Maybe these duties could fall on the university's student government, but if frats keep getting themselves into trouble, why not put an approval system into place?

This is not the first article on this website about at fraternity hosting a party that was offensive or about a frat doing something that has offended someone of a different race. I keep asking the same question about how some of these fraternities can go through with these parties and activities. There needs to be more people over-looking these frats to make sure they are doing the appropriate things because ultimately these frats are a reflection of the schools they are at. I wouldn't want a bad reputation because of a foolish thing a fraternity has done.

It is sad that there is still this type of discrimination happening in the world today. These students should understand and respect there schools history If I was a black student looking to go to this school I would rethink my decision. No one wants to willing go somewhere that they are going to have to face discrimination. I believe that those students should be kicked out of the school for their actions. Maybe then people will understand that, that type of discrimination is not tolerated.