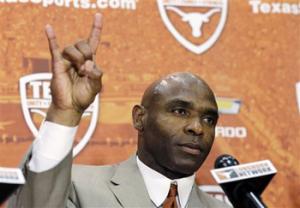 Charlie Strong holds up the "Hook'em Horns" hand signal during an NCAA college football news conference where he was introduced as the new Texas football coach, Monday, Jan. 6, 2014, in Austin, Texas. Strong acknowledged the historical significance of being the school's first African-American head coach of a men's sport. He takes over for Mack Brown, who stepped down last month after 16 seasons. Photo Credit: The Associated Press, Eric Gay.

Texas and Penn State, two college football titans, hire black coaches. It is considered a historic moment in the eyes of many who have followed the football prowess at those two institutions. And the timing of the two black head coach hires is not going unnoted.

At the University of Texas, football is religion. At Penn State University, they need football for redemption. So when these storied programs hired black head coaches within days of each other to return them to past glory, it was a major moment for a sport that has been among the slowest to promote African-American leaders at the highest level.

There have been other black head coaches at top football schools - Notre Dame, Stanford, Miami, UCLA. But the recent hiring of Charlie Strong at Texas and James Franklin at Penn State sent a powerful message, because of the combined prestige, mystique and influence of those teams.

"It's a historical moment," said Doug Williams, the first black quarterback to win a Super Bowl and a former head coach at Grambling. "We've come a long way in a couple weeks," Williams said. "Even though we don't have as many as you would like, but when you get a Penn State and a Texas, them schools together almost make up for about 10 schools."

There are 125 colleges playing in the top-level Football Bowl Subdivision. In 2013, 13 of them had black coaches. That was down from 15 in 2012 and an all-time high of 17 in 2011. Strong and Franklin have not been replaced by African-Americans, so the overall numbers remain low.

For Franklin, the numbers are less important than the opportunities. "I don't underestimate the significance of this moment. I take a lot of pride in that," he said in an interview. "But the most important thing is we're getting to a point where universities and organizations and corporations are hiring people based on merit and the most qualified guy. "We're making tremendous strides," Franklin said. "The more opportunities that coaches get and go out and do well and succeed, it helps. It helps change perceptions, and perceptions are a powerful thing."

Black coaches have won championships in college basketball and pro football, baseball and basketball. But no black coach has won the college football national title.

For Ty Willingham, who in 2001 became the first black head football coach at Notre Dame, the recent events produced a mixture of emotions. "You are extremely proud that it is an African-American," Willingham said. "At the same time, it represents that an outstanding coach has proved his abilities. That's what the whole struggle is about, is the opportunity for a man to prove his abilities. "I don't think it's a novelty now," said Willingham, who also led teams at Stanford and the University of Washington. "In a sense, we're past it. I still don't think we're at that place where it is a commonplace thought. But we are getting closer, and that is a wonderful day."

That may be one reason why race was not a dominant theme when Strong and Franklin were named last week. Some noted that Texas, which fielded college football's last all-white championship team in 1969, had never had a black coach before. And the success of the black coach Kevin Sumlin at archrival Texas A&M made race less of an issue with Strong.

But the issue was still there - when T-shirts went on sale with Strong's face and the words "Black is the new Brown" (a reference to outgoing coach Mack Brown), or when people questioned whether race was the reason billionaire Texas booster Red McCombs criticized Strong's hire and said he would make a good position coach or coordinator. 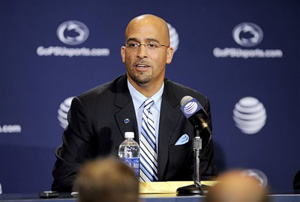 John Thompson, the pioneering black college basketball coach with Georgetown, said it doesn't make sense when so many players but so few coaches are black. "If you love something well enough to perform at it, you got to perform at it intellectually as well as physically. You can't be a good football or basketball player consistently and be stupid," Thompson said. "So (when) you are not in management, you're still perceived as the one who picks the cotton rather than owns the plantation."

Football coaches usually get their first top jobs after success as offensive or defensive coordinator. Strong was stuck for a decade as defensive coordinator for championship Florida teams, getting passed over for numerous head coach positions. In 2009, just before Louisville made him its head coach, Strong said he was told that one Southeastern Conference doormat did not hire him in part because his wife is white.

Franklin, 41, is a dozen years younger that Strong. In some ways, his rapid rise illuminates the greater opportunities available to a new generation of black coaches. Franklin hopped back and forth from college to NFL jobs before spending 2008-2010 as Maryland's offensive coordinator and head-coach-in-waiting. Vanderbilt hired him for the 2011 season. Three winning campaigns later, he landed one of the most prestigious jobs in college sports.

Since his arrival at Penn State, Franklin's narrative has not been about race - Mike Tomlin has won a Super Bowl down the road in Pittsburgh - but about restoring Penn State's reputation, which crumbled beneath the horrific child rape scandal that ended Joe Paterno's reign of 45 years as head coach.

"There's no question that the so-called prime jobs, programs with great traditions, have been less available to African-Americans," said Richard Lapchick, who has spent decades advocating for more diversity in sports. He said it has been tougher for black coaches to build winning traditions because they usually get opportunities with losing teams, and it's tough to turn that around before the ax falls in two or three years. "Stepping in at Texas or Penn State," Lapchick said, "makes that a lot easier."