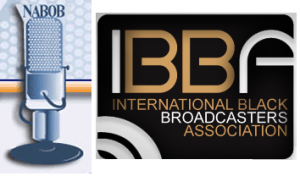 Black Broadcasters are focused on developing ways to improve the financial success and service to the community of broadcast stations owned by African Americans and to increase the number of such stations. Photo Credit: broadbandandsocialjustice.org

The National Association of Black Owned Broadcasters (NABOB) had a lot to discuss when they met in Washington, earlier this month.

The NABOB's 37th Annual Fall Broadcast Management Conference – which also included the 13th "Power of Urban Radio Forum" – focused on developing ways to improve the financial success and service to the community of broadcast stations owned by African Americans and to increase the number of such stations. NABOB - organized in 1976 - represents some 200 Black owned commercial radio stations and 5 commercial television stations around the country. But the organization says that while African-Americans make up 14 percent of the total population, they own only about 2 percent of all commercial broadcast licenses in the United States.

According to NABOB, while there has been a trend of consolidating mass media broadcast licenses, "we see virtually no African American or other minority buyers. Instead, the station trading picture looks much like it did in 1978, before the FCC established the minority tax certificate."

While there has been a flurry of recent TV transactions, "no Black companies are showing up as buyers in the television trading frenzy either." NABOB feels "this could spell the dearth of minority owners in the industry and increase the excessive consolidation of the industry that Congress and the FCC have allowed to occur for more than a decade." 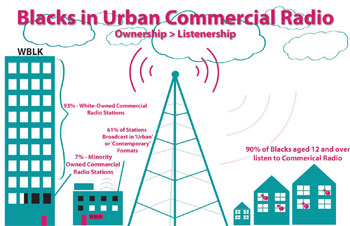 According to Pew Research Center's State of the News Media 2013, "Black-owned radio stations continued to wither in number and several programs hosted by major African American personalities went off the air. The year also witnessed the consolidation of two of the largest black radio networks."

For radio, NABOB says that within the past year, about 20 radio stations that were formerly owned by African Americans were forced into bankruptcy by their banks and sold to non-minority buyers. The failure of these lenders to reach out to minority purchasers, particularly in light of the anemic pace for sales to minorities in general, suggests that radio has regressed back to the pre-1978 days, when minorities were never given an opportunity to participate as station owners.

While that market is big, it is benefiting mostly non-minority media owners for both radio and Television.

According to the African-American Consumer 2013 Report, released in September by Nielsen, African-American buying power continues to increase and is expected to rise from its current $1 trillion level to $1.3 trillion by 2017. The report notes that the "Top Five Advertisers for Media Focused on Black Audiences" were Procter & Gamble, L'Oreal, McDonald's, Unilever and the U.S. Government. But that report also found that "Although 81 percent of Blacks said they believed that products advertised using Black media are more relevant to them, only 3 percent or $2.24 billion of the $75 billion spent on television, magazine, Internet and radio advertising was with media focused specifically on Black audiences."