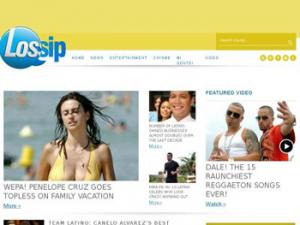 "Unlike traditional Hispanic media, which tends to cater to advertisers and celebrities rather than its actual consumers, Lossip and other Moguldom Hispanic properties will create content that puts users first," said Lossip Deputy Editor Sugey Palomares. "We won’t be afraid to take a strong point of view—we’ll speak ‘sin pelos en la lengua,’ and serve as a pop culture curator for the new Latino generation."

According to Moguldom Media, Lossip competes with such news sites as TMZ, Gawker, and RadarOnline, with an "urban sensibility to engage young Hispanic females, filling an unmet need for strong, opinionated, and funny coverage, and going beyond race and language to address young Latinos’ cultural duality."

The company notes that research shows two-thirds of millennial Hispanic audiences, born in the U.S. and English is their primary language, differ significantly from earlier Hispanic generations. "Most Hispanic millennials aren’t afraid to stand out, be unique, and claim their Latino identity," says Moguldom Media. "They are also highly mobile, social, and tech-oriented: half of Hispanics 18-29 use a mobile device for Internet access at home, and consumer technologies are key markers of status."

Moguldom Media Group also plans to launch "LatinaMadre" later this year as a website to provide news, discussions, and advice for young Hispanic mothers. That site follows in the footsteps of MadameNoire," a lifestyle website for all women of color.

In July, Moguldom Media also launched afkinsider.com, a website for business professionals not only in Africa, but for those investors and businesses interested in doing business in the fast-growing African markets.