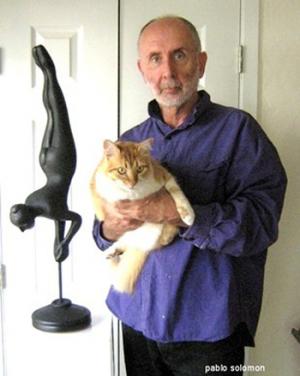 The fear that the Obama Administration is going to crack down on gun owners is shared across race and ethnicity as expressed by artist and designer, Pablo Solomon. Photo Credit: pablosolomon.com

Many gun owners believe they are being targetted by the Obama administration, and that fear has inadvertently bolstered the gun manufacturing industry as many Americans flock to buy up weapons and ammunition.

It is not just white males who are concerned – this feared crack down cuts across racial and ethnic lines.

Pablo Solomon, an artist and designer, who lives in the Austin, Texas area, expresses views shared by many Americans. Solomon, who is of Lebanese and Mexican descent, feels that the Obama administration is gearing up for more centralized government power.

"President Obama operates from a far left prospective to which he was indoctrinated his entire life," said Solomon, who is also a gun owner. "Therefore he views a centralized government with overriding power, no real political opposition and the good of the many over the rights of the few as key elements."

Solomon said that gun control is not the solution to violence.

"Like many leftists, President Obama tends to ignore the real causes of violence in America – decay of morals, psychologically disturbed individuals, drugs, destruction of the family unit, constant bombardment by violent entertainment, violent and ignorant role models, etc. while using fear of guns to remove guns from those who might at some point want to stand up against Marxist oppression," Solomon said.

Solomon predicts that minorities will stand up if the government's plans to restrict gun rights.

"Just as in the Texas Revolution against Mexican tyranny, many minorities fought for freedom, minorities will stand up if this administration goes too far," Solomon said.

Solomon has a libertarian view of the world and believes government should stay out of people's lives.

"I believe in the government staying out of my life and my pocket book to the greatest degree possible," he said. "Of course with rights, come responsibilities. I believe that giving the government an inch usually results in the government eventually taking the distance to the moon. For example, income tax was supposed to be a temporary tax to finance WW I. Now after nearly 100 years of this 'temporary' tax, our IRS agents are carrying out political persecutions, are armed, and will soon have control over our health care."