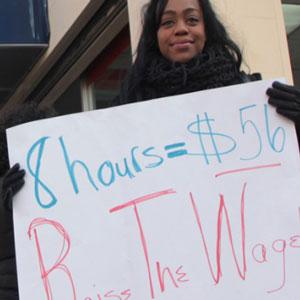 Alvin Turner met Chad Tall late last month in pursuit of a cause that now spans the course of both their lifetimes.

Turner was there back in 1968, when Martin Luther King traveled to Memphis to demonstrate in support of striking sanitation workers like him merely seeking a livable wage. This time, the 78-year-old rebel took his defiant stance in New York’s Time Square, side-by-side, the 20-year-old
Tall and 400 other protesting fast food workers again moved to take matters to the streets.

“I did what I knew I had to do; I had to stand up and be a man,” Turner reflected. “If you’re going to win anything, you have to stand up… opening the door for someone else.”

Among thousands and thousands of others, that someone else has proven to include Tall, a longtime Taco Bell worker struggling to provide for his family — just as Turner was all those years before.

Despite the fact that global fast food receipts are up by 80 percent over the last five years, most workers are still forced to work for the minimum wage of $7.25 an hour and without any benefits. According to Yahoo Finance, McDonald’s bankrolled some $34.2 billion in sales last year, while Burger King and Wendy’s cashed in over $8 billion in profits. Shares for Yum Brands, owner of Taco Bell, KFC, and Pizza Hut, were also up by more than 10 percent. 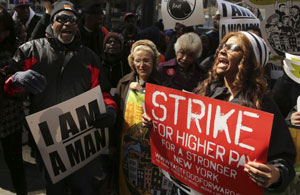 With their ire raised, by said data and sponsored by the labor-community coalition Fast Food Forward, workers are now demanding a greater, more livable wage for themselves. Though NYC local pols recently agreed to mandate minimum pay at $9 an hour (roughly $18,000 a year) by 2016, workers rightfully counter by saying how is that to suffice in a city where average monthly rent for a two-bedroom apartment tops $3,000.

Power concedes nothing without demand, and so, more than 400 protestors took to the streets — fully aware of the repercussions that might well await them.

“What they accomplished took hard work and sacrifice, and now we’re trying to follow in their footsteps,” said Tall. “We’re not looking for a handout; we deserve the same things they fought for, to be treated with respect and to earn enough to afford food, shelter, and clothing.”

The median age of a fast food worker is now 28 and two out of every three are females, more often than not, they are single mothers entrusted with caring and providing for an entire family.

“We want to change the dynamics,” said Jonathan Westin, executive director of New York Communities for Change. “Corporations make billions in profits; they can afford to pay a living wage so people don’t have to live in poverty.”

I don't think that it is too much for people to be paid at least enough to be able to survive. These people aren't asking to make $50,000 a year. They just want to be able to provide for their families. I could be wrong, but I thought that was the point of minimum wage. The owners of these fast food companys are giving themselves big fat pay raises while their workers are struggling to make ends meet and probably working more than one job. Money is a major form of oppression in this country. Those with money are privileged and have access to resources that others don't. Then, when people talk about young kids and teens comitting crime, they ask where are the parents? The reality is, especially in single parent households, that the parents are working 2-3 jobs, so they can't be home with their kids as much as they'd like. In this capitalistic country, the elite make more money and hold onto it for themselves at the expense of the worker. According to Adam Smith, capitalism works best when there is a reciprocal relationship between the owner and the worker. The owner must pay the worker enough to be able to live and buy consumer products while at the same time making a profit. This system doesn't work if the owner keeps all the money to themself.