Farmers Should Be Allowed to Hire Foreign Workers 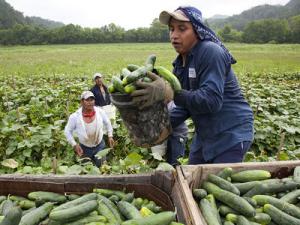 Republicans and Democrats agree that farmers should be allowed to hire foreign workers. Photo Credit: articles.businessinsider.com

WASHINGTON (AP) - Republicans and Democrats said this week that farmers should be allowed to hire foreign workers more easily as Congress reworks U.S. immigration laws. But there was some disagreement on how it should happen.

Lawmakers and witnesses at a House Judiciary subcommittee hearing said the visa program that lets farmers hire foreign agricultural workers is so unwieldy it accounts for only a very small percentage of the hundreds of thousands of farm workers hired in the U.S. Half or more of agriculture workers are here illegally, experts agree.

These workers play a critical role to the U.S. economy and food supply, harvesting fruits and vegetables around the country. But growers said their productivity and ability to keep operations in the U.S. is threatened by difficulties ensuring a stable labor supply, and that must change. Meanwhile workers said they should get more protections and that farm workers should have the opportunity to obtain citizenship or at least permanent legal status.

"It is a costly, time-consuming and flawed program," said Judiciary Chairman Bob Goodlatte, a Republican.

"If we are honest we must admit that Congress essentially left farmers with no choice but to hire undocumented workers. Let's not fool ourselves," said Rep. Zoe Lofgren, a Democrat.

The existing program for temporary farmworkers - the H-2A visa - allows workers into the U.S. for 10 months at a time but growers complain that it is extremely bureaucratic and pays artificially inflated wages. Some 55,000 H-2A visas were issued in 2011 compared to over a million workers on fields and farms. Also, dairy farms and meat processing plants, which are increasingly major employers of foreign workers, are not covered by the program.

Lawmakers of both parties said the system is broken and needed to be fixed but disagreements emerged over how to improve it. Goodlatte said there should be a new program to replace the existing one and ensure a "stable, legal agricultural workforce." But several Democrats said any changes should be made in the context of comprehensive changes to the nation's immigration laws that would provide a pathway to citizenship for illegal immigrants already in the country, including eventual citizenship for farmworkers.

U.S. farm companies should be allowed to hire foreign workers with the exception of generous pay wages and benefits. These workers play a critical role to the U.S. economy and food supply, harvesting fruits and vegetables around the country. Many farmers try to recruit U.S. workers but they know eligible U.S. laborers will not stay on the job. Foreign workers are always looking for ways to live better, raise their family and therefore will take on any job. I am not implying that U.S. is made up of indolent individuals but farming is really hard work and most Americans do not want to take on that kind of job. Majority of foreign workers are undocumented so if they can obtain legal documents while working in the U.S. and remaining out of trouble then it should be granted.