Indian Casinos: Criticized For Leading To A Path Of Self-Determination? 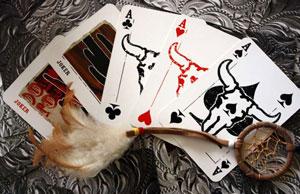 Poker is a hit at most casinos

As long as Indian casinos have existed, the debate on their revival or demise to Native American tribes is just as prevalent. The pros and cons of casinos on American Indian lands is a longstanding argument since the building of the first casino. On one hand, the argument is that casinos are a scourge on reservations, causing irreparable social damage to the community while harming the environment. On the other hand, the money generated by these casinos is boasted as a godsend to reservations where jobs are limited, and cash for social programs is just as sparse.

The balance of the casino on the reservation where providing enough funds to help more social programs than creating more social issues is the task of Native American tribes as well as to persist as autonomous governments, demonstrating success in their culture while promoting pride for each tribal member on the reservation.

The ability of Indian casinos to generate money is understandably not part of the debate; casinos definitely increase the financial aspect for the reservation. The question is who pockets the profits?One argument against Indian casinos is that investors, not the Native American tribes, are the true winners.

From the TIME Magazine, article “Look Who’s Cashing in on Indian Casinos,” Donald L. Bartlett and James B. Steele find hundreds of millions of dollars go to the outside investors of an Indian casino. The article discloses that in 2001, Indian casinos accumulated $12.7 billion in revenues, estimating that the tribes profited around $5 billion. Bartlett and Steele go on to explain that only a small amount of Indian casinos provide money to tribal members, which tends to include smaller tribes near urban areas like the Californian Table Mountain Rancheria tribe. Bartlett and Steele indicate that most Indian casinos barely break even.

So why do they continue to build Indian casinos? Bartlett and Steele mention how the largest reservation, the Navajo Nation, opposed construction of Indian casinos because of religious reasons.

However, in 2008, the Fire Rock Casino opened on the Navajo Nation north of Gallup, NM. Putting aside the warnings from the Navajo legend of The Great Gambler who nearly loses his life through gambling and overindulgence, the Navajos could no longer ignore the promise of increasing their revenue by $32 million, approximately one-fifth of the tribe’s annual budget, with the construction of a casino on the Navajo Nation. Felicia Fonseco’s article “Navajo nation opens first casino” in the Santa Fe New Mexican, states that poverty, and an unemployment rate of over 50 percent, led to the decision to build Fire Rock Casino as a way to stimulate economic development.

Economic development on reservations remained elusive prior to casinos because investment by private monies was not forthcoming. Judith Antel, Audie Blevins, and Katherine Jensen, in the Journal of the Community Development Society, state in their article, “American Indian casino gambling: issues of tribal sovereignty and economic development,” that Indian casinos lure private money investors to the reservations. The outside capital investors generate their millions as detailed by Bartlett and Steele, but this outside money allows poverty-stricken reservations year-round employment, and an increase of revenue to tribal budgets. Also, crucial to American Indians, the reservations maintain their autonomy while increasing finances. Private investors do make money off the Indian casinos, but unlike other instances in history, Native Americans also benefit with jobs and additional budget monies. 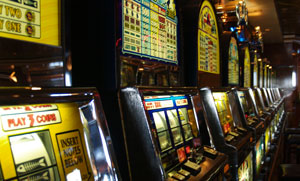 Along with economic stimulation, the Southern Ute Indian Tribe also addresses the social ramifications on the reservation, for example, the Southern Ute Community Action Programs Inc., looks into promoting neighbor and family well-being. Along with increased tourism, which means more people to the reservation of 1400 Southern Utes, they hired an additional police officer, funded by energy finances, which originated through casino profits. Education on Southern Ute history, culture, and language provided by the Montessori Academy is established from casino revenues.

The responsibility of Native American tribes is paramount in balancing casino profits for economic development as well as repair reservation social problems like domestic abuse, alcoholism, and crime. An argument can be made that Indian casinos reverses traditional American Indian culture, and places more value on the dollar. However the real call for all the bad press of Indian casinos is perhaps out of resentment that tribes finally have the ability to encourage local economic development, maintain autonomy, and take care of tribal members without outside forces dictating how the tribes run their reservations.

Since Columbus landed in 1492, outside forces have taken advantage of Native Americans, but this time, the Native Americans reap benefits as well. Indian casinos provide a chance for self-determination by American Indians, the ability to correct their own problems with programs developed specifically for their unique reservation issues, while becoming self-sufficient, and controlling their own fate.

Casinos are a billion dollar industry.It is interesting how outside investors insist on taking well over half of the profits.
The land was native to some, but they never seem to get credit for it. Ever since the cultural genocide of the Native Americans and colonialism thereafter, culture has never been the same. You would think after colonists took culture they would leave them be. But no, the Natives repeatedly take attacks from those with capital. Native Americans struggle to form their own way of life, because others reap their benifits. History shows a pattern, a way of life for the WASP group to take profits rather than accept equality for all. If the native people want to become self-sufficient, we need to honor that request. On a final note, if anyone is to benefit economically for the cultural loss of the Native Americans, it should be the natives, not outside investors!

As with any new institution or major building effort there is always going to be concern with not only the standard zoning issues but also what kind of social impact it will have on neighborhoods or the community; and in this case the reservation community. For those who say outside investors gain a lot of the billion dollar profit that may or may not be true and I'm sure it varies from casino to casino, the important thing here is that the tribe maintains most of the financial gain because they use that money to improve the quality of res life, which is usually poor at best, employ thousands of workers which are normally Native Americans, and casino's usually make generous donations to local schools and organizations. Colonialism continues to attack the way of life for our native inhabitants and it's not right, forcing them to continually give up land back then and they continue to fight today to keep it. It's their land, their right to build and maintain profit from what ever money they make and to filter that to tribal members for an income, create social programs to help those members in need, and to fund schools on the res.

Casinos are such revenue-generating organizations that the benefits outweigh the costs when constructed on Indian reservations. I've always had the thought in my mind that casinos on reservations were an odd thing, and I never really thought about why they were there. It makes complete sense that Indians simply reap the economic benefits from the casinos; a business that will never go out of business. Near my hometown, 2 of the 3 casinos within decent driving distance are located on reservations. With the revenue, the social class of the Indians on the reservations is able to change for the better. As the article says, jobs are provided to those who are unemployed, and money is given to organizations to benefit society. In order to receive these benefits, Native Americans have to sacrifice traditional aspects of the culture, which is the main problem I see with this economic solution.

Casinos are located on Indian Reservations because the benefits of the casinos outweight the costs of having the casinos on tribal land. Casinos on Indian Reservations create a lot of economic opportunity for the reservation and create jobs that tend to be rather scarce. It is obvious that the economic opportunities are there because more and more reservations seem to have casinos. It is a way for them to run their land and make money without outside interference. Casinos act as an economic stimulant which is what a lot of reservations need. They provide jobs and funds that spur the economy and gives reservations the chance to be self sufficient. However, I can see where the argument is made that the casinos are having a negative impact on the Native American culture. The image that people see of Native Americans is changing because of the problems that this new way of life can create. I thought it was interesting that the article stated that private investors seem to make a lot more money than the tribes do with regards to casino revenue. This just shows how stimulating the casinos are for the economy because the majority of the revenue does not even go to the tribe, but to investors. The casinos help the economy by creating jobs and getting funding for programs. Casinos obviously help Indian Reservations and hurt them at the same time. However, Reservations will continually build them because the financial benefits seem greater than the preserving of Native American culture. This is why the Reservations are criticized, however tribes finally have the chance to spur economic development and become self sufficient.

The stewardship of the casino profits varies tribe by tribe. What if profits were used to fund learning centers focused on reconnecting tribes and the larger population with native wisdoms?