Hispanics Are Being Registered to Vote in Alabama 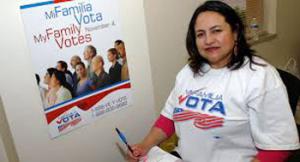 Efforts are being made in Alabama and other states to register more Hispanics to vote. Photo Credit: politico.com

Hispanics are being registered to vote in Alabama by an immigrant rights group so improve participation in local, state and national elections. The group is trying to change the current trend of very low voter turnout among Hispanics.

The Alabama Coalition for Immigrant Justice says it's launching a program called "Alabama Vota" to encourage more Hispanic voters to get involved in the electoral process.

The program is concentrating mainly in the Birmingham and Huntsville areas. But a website with Spanish-language information about registering to vote is available to anyone.

The program includes information about how to comply with Alabama's new voter identification law.

The group says it wants to register hundreds of new voters in the next two months. It plans to hold dozens of events before Election Day to encourage immigrants to vote.

The coalition says Hispanics had very low participation rates in 2010 and 2012, and it wants to change that.