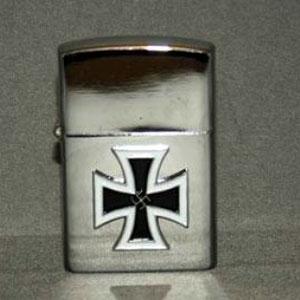 Zippo's German distributor is withdrawing a number of lighters bearing militaristic designs after they showed up on an extremist website that sells anti-Semitic and neo-Nazi clothing and accessories.

U.S.-based Zippo Manufacturing Co. said it had no idea the designs carried a negative connotation and apologized for bringing them to market.

One lighter bears the image of a soldier and the word "Landser" - an old German word for infantryman, but also the name of a German neo-Nazi rock band whose members were convicted of hate crimes a decade ago.

Other lighters feature an iron cross - a German military decoration first awarded in the 19th century and appropriated by Adolf Hitler - combined with excerpts from German folk songs.

"The images on the lighters are typical of German right-wing extremists and neo-Nazis, though not so typical of their American counterparts, who have more freedom to directly use Nazi imagery," said Mark Pitcavage, director of investigative research for the New York-based Anti-Defamation League.

Nazi imagery is illegal in Germany.

The Zippo lighters appeared on the website of Versand der Bewegung ("Distributor of the Movement,") an online retailer based in Murnau, just south of Munich. Other items for sale on the website include racist music, anti-Semitic literature, a T-shirt with the legend "Nazis Out - Out of Jail," and an anti-Israel shirt bearing an obscenity. Versand der Bewegung has said it is facing trial in Germany for incitement.

Zippo GmbH, a German distributor part of a joint venture between Zippo Manufacturing and a French company, got the offending designs several years ago, though it's unclear who provided them, according to Zippo, who made the lighters in the U.S. between 2005 and 2012 and shipped back to Germany for sale.

Zippo produces more than 10,000 designs a year, including ones tailored to specific U.S. locales and dozens of countries around the world. Though the manufacturer rejected hundreds of designs that it deemed to be in poor taste or that ran afoul of copyright law, Zippo employees in the U.S. and Zippo GmbH had no clue the insignia on the withdrawn lighters were considered offensive, said Zippo's general counsel, Jeff Duke.

"There was no conscious understanding at all by anybody at our German distributor that this was connected with a skinhead group," he said. "They were terribly mortified when they found out about it, and immediately took steps to withdraw it from the market."

The ADL's Pitcavage called Versand der Bewegung an "extreme right-wing German website" associated with neo-Nazis, and said the lighters' appearance on the website is telling.

"In this full context, the lighters in question are indeed problematic and seem to be an attempt to convey extreme right-wing and/or neo-Nazi sentiments in Germany," he said. "Zippo would be right in recalling them."