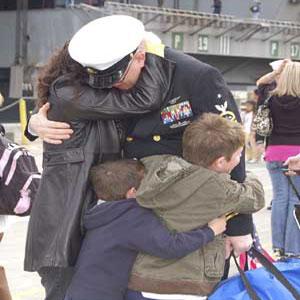 Military personnel fight for our country and sacrifice greatly for this honor. But is it fair to make their families sacrifice not only losing a husband or wife to months away in a war zone, as well as struggle to eat, pay bills, and have a place to live? Photo Credit: drleslieh.com

Stretched to the breaking point, the United States military continues a decade long fight in two foreign wars with many military families battling the economic strains at home. According to a report by the office of Army Demographics, ethnic minorities make up about one-third of active duty soldiers.

With many non-commissioned officers only making low to mid-range salaries, it is becoming increasingly difficult for military families to survive on one income. According to military.com, the monthly salary for an active duty enlisted soldier with less than four months of service is about $1,300, or $15,000 per year.

This financial strain means that military families rely more and more on government assistance such as food stamps to get by. According to an article in Stars and Stripes, food stamp usage tripled over the last four years. In the article, writer Seth Robbins, says the Defense Commissary Agency reported that about "$88 million worth of food stamps were used at commissaries nationwide in 2011, up from $31 million in 2008."

The Stars and Stripes article also says that, John Smith, a spokesperson for Operation Homefront, a nonprofit organization that assists military families, reported that since 2008, his group saw a 50 percent increase in food requests.

The recession at home compounds the problem for military families facing financial hardship, and they often face frequent moves to different bases, which makes it difficult to find steady employment. That problem is even worse when unemployment is hovering at 10 percent nationwide. In many cases, the military paycheck is the only steady income that some families rely on.

Smith said that when one spouse cannot find work, the family then has to depend on the military salary, which is usually not enough. In addition, returning service men and women are also facing one of the worst job markets in the last 25 years.

Operation Homefront currently works with Dollar Tree in the Back to School Brigade program that gathers school supplies for the children of military families.

“For the last six years, Dollar Tree and its customers have helped our communities’ service members,” said Jim Knotts, president and CEO of Operation Homefront. “Military families not only deal with the effects of the war, but also the current economic difficulties. These issues put a lot of weight on them as they try to rebuild their lives. The donated school supplies enhance the morale and the success of our military children, while removing some of the burden on these military families.”