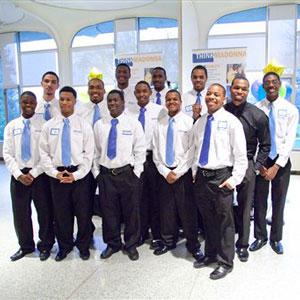 This undated photo released by Madonna University in Livonia, Mich., shows students at a scholarship banquet. Second from the right in a black shirt, Bryant George, 25, founder of a program called Bridging Lost Gaps, which helps to smooth the transition to college for at-risk inner city students and increase African American enrollment at the private Catholic school. Photo Credit: AP/Madonna University

DETROIT (AP) - Joshua Thompson is part of Madonna University's incoming freshman class, but he and 24 other at-risk black males from Detroit schools will experience college and its challenges beginning with a special seven-week summer program.

The program is part of Madonna's Bridging Lost Gaps and begins Sunday.

It prepares inner city high school graduates, including black students and other minorities for the academic rigors and cultural changes that will greet them at the mostly white, Catholic university west of Detroit in Livonia. Of the 4,382 Madonna undergraduates in 2012, 14 percent were black.

"It's a small school and more Caucasian than black, but diversity is a good thing," said Thompson, an 18-year-old graduate of Henry Ford Academy for Creative Studies.

Identified by high school counselors, teachers, and principals, students like Thompson then meet Bryant George, the program's 25-year-old founder and director, who then recruits them into the program.

"I ask them: 'What is real life to you and how are you going to succeed?" George said. "Nine out of 10 can't answer."

Those accepted into Bridging Lost Gaps receive scholarship awards of $3,000 a year, and we waive the freshmen dorm fees for their first year.

About half of the Bridging Lost Gaps students are also involved in Madonna's Real Life 101 mentoring and academic support program. They receive $1,000 for up to five years and a laptop.

George said the McGregor Fund foundation donated a $150,000 grant for the summer programming and next year's recruitment.

Bridging Lost Gaps is in its third year and includes 6 Madonna juniors and 11 sophomores. So far, the retention rate is 100 percent.

"This results from the extensive mentoring program established by George in collaboration with faculty and staff at Madonna University," said Michael O. Kenney, Madonna's vice president for planning and enrollment. And of course, the students deserve credit for working diligently and investing in this rigorous, comprehensive approach."

Too many young black men never make it out of bad neighborhoods or other negative environments, George said. Federal statistics have shown that one in three black males could go to prison at some point in the lives, but it is not just a matter of racism against blacks, it also includes the personal feeling of being lost in a world that does not permit them a future of wealth and freedom.

George graduated from Northwestern High School in Detroit and in 2010 from Madonna with a bachelor's degree in criminal justice. He sees Bridging Lost Gaps as a pipeline between the city and Madonna.

"The majority of my childhood peers are incarcerated, deceased, or stuck in life," he said. "This is investing in education, not incarceration.

But college is often intimidating, especially for students who aren't prepared to compete academically.

"College wasn't the big talk in my family and I was scared," George said. "I graduated from Northwestern with a 2.8 grade point average and I got 14 on my ACT. At Madonna, I was in classes with kids that were homeschooled with 4.0 GPAs." 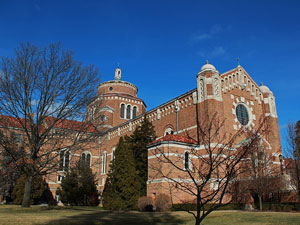 During the summer program, Thompson and the other freshmen will take introduction to English and math, and computer literacy - courses many struggle with on the college level.

"They are initially scared of college writing and mathematically they are far behind," George said of some incoming students. "I want to build a confidence (during the summer program) that once the real world starts they have an opportunity to compete with any student."

Thompson is going in with confidence, but will take all of the help that's offered.

"I'm expecting to get through college without a problem," he said. "Math always came easy. But I did mediocre in the other classes."