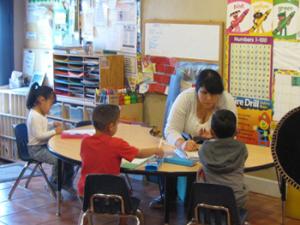 The lawsuit covers broad issues accusing the state of being in violation of state constitutional requirements for an equitable and sufficient education for all children. Photo Credit: hechingerreport.org

A national civil rights group had filed a lawsuit alleging New Mexico's public education system violates the constitutional rights of low-income children as well as Spanish-speaking students and others whose primary language is not English.

The Mexican American Legal Defense and Educational Fund, or MALDEF, brought the lawsuit in state district court in Santa Fe on behalf of parents of about three dozen students in the Albuquerque, Gadsden, Las Cruces, Magdalena, Santa Fe, Zuni and Espanola school districts.

The legal challenge is much broader than a case filed in Gallup last month seeking to increase funding for public schools.

Both lawsuits contend the state provides inadequate funding to educate "at-risk students," many of whom are Hispanic and Native Americans, in violation of state constitutional requirements for an equitable and "sufficient" education for all children.

But the MALDEF lawsuit also says the state has failed to properly implement other provisions of law, including mandates for bilingual and multicultural educational programs and a constitutional requirement for "perfect equality" in the educational opportunities for "children of Spanish descent."

"The state as a whole does a poor job in recruiting, training and retaining teachers able to speak Spanish and the other native languages other than English," according to the lawsuit.

Funding for pre-kindergarten programs is inadequate, according to the lawsuit, and the court was asked to invalidate recent initiatives by Republican Gov. Susana Martinez, including a program of assigning A-to-F grades to schools and a teacher-evaluation system heavily based on student performance on standardized testing.

The state has implemented "arbitrary school accountability and teacher evaluation systems that bring no relief but instead aim to drive teachers away from the most needy students," the lawsuit said. 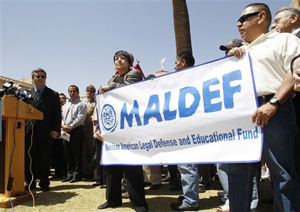 He pointed out the high school graduation rates of Hispanic, Native American and "English language learner" students have increased since 2011.

But David Hinojosa, MALDEF's southwest regional counsel, said, "When you really look at the facts, no one can dispute that New Mexico schools are failing. No one can dispute that these children are not achieving their full potential, and they are being denied the basic educational opportunities they need to succeed."

According to the lawsuit, 67 percent of white students were proficient in reading in the 2012-2013 school year compared with 46 percent for Hispanics and 35 percent for Indians.

Hispanics account for about 60 percent of the nearly 337,000 students enrolled in public schools, and Native Americans represent 10 percent of student enrollment in the current school year, according to the lawsuit. About one in six students are English language learners.

The case is "probably the most significant education lawsuit ever filed in New Mexico," Hinojosa said.

He stressed that the lawsuit doesn't challenge the authority of the state to establish a teacher-evaluation or school-grading system, but he said the current programs were arbitrarily implemented and violate constitutional requirements for helping all students succeed.