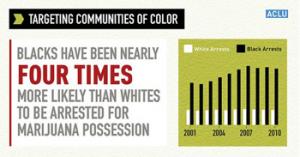 Racial discrimination and disparities were consistently high for blacks across the board, in counties large and small, urban and rural, wealthy and poor, and with large and small black populations. Photo Credit: ourweekly.com

The first-ever assessment of nationwide marijuana arrest data by race has found that racial profiling means blacks are almost 4 times on average more likely to be arrested than whites despite using pot at similar rates, according to a new report.

The American Civil Liberties Union report, "The War on Marijuana in Black and White: Billions of Dollars Wasted on Racially Biased Arrests," found pot possession now make up nearly half of all arrests in the "War on Drugs" - over 8 million between 2001 and 2010 – and that the racial disparities in marijuana arrests have "grown significantly worse." Though arrests of whites have been relatively constant between 2001and 2010, the arrest rate for blacks spiked 32.7 percent and today a black person is 3.73 times more likely to be arrested for marijuana possession.

"The war on marijuana has disproportionately been a war on people of color," said Ezekiel Edwards, director of the ACLU Criminal Law Reform Project. "State and local governments have aggressively enforced marijuana laws selectively against Black people and communities, needlessly ensnaring hundreds of thousands of people in the criminal justice system at tremendous human and financial cost."

The ACLU report did not include arrests of Latinos because the FBI's Uniform Crime Reporting data of arrests by age, sex, and race does not identify Latinos as a distinct racial group so does not distinguish between white and Latino arrests. In other words, an arrest of a Latino is overwhelmingly categorized as a "white" arrest. 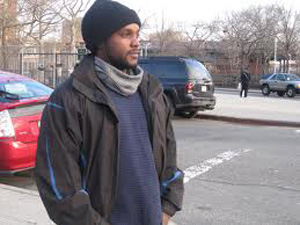 The 187-page ACLU report includes a breakdown of data for each state using infographics illustrating that while racially biased disparities exist all over the U.S., in some counties where there is racially- and community-targeted selective enforcement of marijuana laws, those disparities mean blacks were up to 30 times more likely to be arrested. But the disparities were consistently high for blacks across the board, "in counties large and small, urban and rural, wealthy and poor, and with large and small black populations," according to the report. "Indeed, in over 96 percent of counties with more than 30,000 people in which at least 2 percent of the residents are black, blacks are arrested at higher rates than whites for marijuana possession," notes the report.

The report also offers profiles of individuals who have been arrested in the past and how it has impacted their lives. According to the ACLU, these arrests have a particularly detrimental impact on black communities since being arrested for possessing even small amounts of marijuana can disqualify them from "public housing or student financial aid, lose or find it more difficult to obtain employment, lose custody of their child, or be deported."

"It is not surprising that the War on Marijuana, waged with far less fanfare than the earlier phases of the drug war, has gone largely, if not entirely, unnoticed by middle- and upper-class white communities," states the report.

Despite popular support for marijuana legalization, ACLU says the aggressive enforcement of marijuana laws in general cost an estimated $3.61 billion in 2010 alone, with just New York and California spending over $1 billion combined.