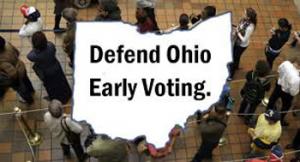 Voting Rights at still challenged in Ohio, an important swing state, as we approach the mid-term election in November. What is tied up in the court system is what should be the schedule for early voting, which could start as early as next week.

Attorneys for the state of Ohio have formally asked the full federal appeals court to review a lawsuit affecting the swing state's early voting schedule. Ohio's attorneys said in a Wednesday court filing that immediate action is needed to reverse a judge's order that allows early ballots to be cast next week.

Ohioans can vote absentee by mail or in person.

A three-judge panel of the 6th U.S. Circuit Court of Appeals in Cincinnati upheld the judge's order Wednesday. But the state is appealing the panel's decision and wants the full appellate court to grant a rehearing.

"Ohio offers more options than 41 States," the state's attorneys wrote. "Yet the panel held that Ohio's schedule violates the Constitution and Section 2 of the Voting Rights Act. It was mistaken." 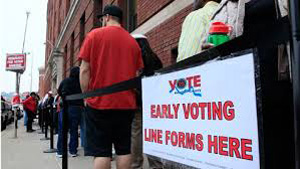 In its 3-0 decision, the panel of judges concluded that none of the interests put forward by Ohio sufficiently justified the burden found to be placed on certain voters by two election-related measures.

One is a directive from Husted that established uniform early voting times and restricted weekend and evening hours. Another is a GOP-backed state law that eliminates so-called golden week, when people could both register to vote and cast ballots. Without those days, early voting would typically start 28 or 29 days before Election Day instead of the prior 35-day window.

The American Civil Liberties Union of Ohio filed the lawsuit on behalf of several black churches and the state's chapters of the NAACP and the League of Women Voters.

The plaintiffs claimed that the new rules would make it difficult for residents to vote and disproportionately affect low-income and black voters, who, the groups say, are more likely to use the weekend and evening hours to vote early in elections. The black churches in the lawsuit say their parishioners have come to rely on rides they provide to the polls after Sunday services to vote early.

Aaron Ockerman, the executive director of the Ohio Association of Election Officials, said local boards are prepared for the start of early voting even as the date remains in flux.

"Neither the ruling nor the appeal is going to have any impact on our ability to serve voters," Ockerman said. "We're ready for whatever the court tells us to do."