Court Okays School Ban of US Flag Shirts for Safety 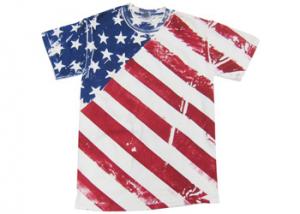 In an attempt to avoid violence during Cinco de Mayo celebrations, a Northern California school made students turn American flag T-shirts inside out. The The 9th U.S. Circuit Court of Appeals approved the measure. Photo credit: theflagshirt.com

A federal appeals courts says a high school in Northern California with a history of racial tension acted appropriately when officials ordered students wearing American flag T-shirts to turn them inside out during the Mexican heritage celebration Cinco de Mayo.

Administrators feared the American-flag shirts would enflame the passions of Latino students celebrating the Mexican holiday. Live Oak High School in the San Jose suburb of Morgan Hill had a history of problems between white and Latino students on that day.

I think a student should be able to support and wear their nations colors. By making this student take off his American flag shirt on the day of a Mexican holiday, it shows the student that he can't support his nation. Yes I know there has been violence at this school but that needs to be managed a different way than saying to a student he can't wear his nations colors/flag. These students obviously need to learn that even if someone is supporting their nations color/flag they aren't trying to be disrespectful to your nation. They are just supporting their own country. I totally disagree with this decision.

With all due respect for PARKS2014, you are a clear example of why a national identity will be impossible to forge in the US and the Nation will remain segregated, as implied in your text is the exclusion of students identifying with the celebration of 5 de Mayo as not belonging or not supportive of the nation. Because you celebrate your ancestry does not mean you are not a part of this country, it does not mean you don't support it, it does not mean you don't love it. This children are American, their ancestral lines are being celebrated in in the right geographical location. Check your history and lets embrace each other's culture to make this nation a richer one.

Students can take in other cultures while wearing their nations color. Maybe that student forgot the school was celebrating the 5 de Mayo. I just think that a person should be allowed to wear their nations colors whenever they want. I am a person that doesn't judge a person based of their skin tone or where they are from.

I completely disagree with this. They should be able to wear whatever they choose to wear as long as it is not offensive, and wearing the colors of the country they all live in is not. Maybe instead of telling students what they should and shouldn't wear they should find better ways to stop the violence all together.