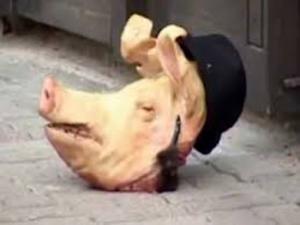 Anti-Semitic acts, including the delivery of packages with pig heads, are occurring in the Jewish community in Rome. Photo Credit: jerusalemonline.com

Italy's president has condemned threats against Rome's Jewish community in recent days, including the delivery of packages containing pig heads, as a "miserable provocation".

President Giorgio Napolitano said Monday during Holocaust Memorial Day commemorations that recent insults to the Jewish community are "comparable only to the repugnant material in those packages."

Police on Monday said they have detained two men, ages 33 and 47, on suspicion of instigating racial hatred through anti-Semitic graffiti, including denial of the Holocaust, near the main judicial offices in Rome. Authorities say the men belong to different far-right groups.

No arrests have been announced for the delivery of the pig heads.

This is awful. the pig heads are totally racist and really disgusting. i get so frustrated when people deny the holocaust, it makes them look so ignorant.