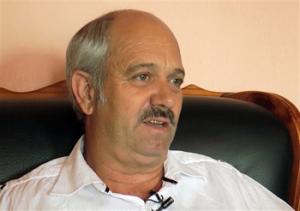 In this image from TV, Christo Brand the Robben Island jailer talks to The Associated Press Saturday Dec. 7, 2013, in his Cape Town home, about former South African President Nelson Mandela who was assigned to guard from 1978 until his release in 1990. Mandela was convicted of treason and sentenced to life imprisonment in 1964. The former Robben Island warder Brand said "I want to say Mandela was my prisoner. He became my friend, and was also like a father to me". During the interview Brand recounted a meeting with Mandela during political negotiations to build a new constitution for South Africa, when Mandela saw Brand and said to the assembled members of parliament making a big announcement to everyone, "You know who is this person? This person was my warden, this person was my friend." I feel very humble, I feel very small at that moment said Brand, during a photo session Brand stood on the side but Mandela said, "No, no, you must stand next to me, we belong together." Photo Credit: APTN TV OUT.

Nelson Mandela had the unique ability to turn enemies into allies as evidenced by his relationship with his jailer. The jailer was with Nelson Mandela during all those years the anti-apartheid icon was imprisoned on Robben Island. And, like millions around the world, he has been hit hard by Mandela's death.

Yet this South African was not one of Mandela's fellow prisoners. Christo Brand was his jailer.

Such was Mandela's charm and ability to turn enemies into allies that even the black political prisoner and the white Afrikaans warden forged an unlikely but enduring friendship. Mandela used that same remarkable ability to forgive and to forge reconciliation to transform South Africa into a multiracial democracy after he stepped out of prison in 1990 and became the country's first elected black president four years later.

Mandela and Brand last met about two years ago when Brand, now in his 50s, brought his wife, son and grandson to see Mandela in Cape Town in a Sunday afternoon visit that lasted nearly three hours.

They had "nice chats about the past, about his family. He wanted to pick up my grandchild, to hold him, which he was a little bit shy to go to him. You could see he really reached out for touching a child at that moment," Brand recalled.

"When I got the message when he passed away, it was very sad for me," Brand told The Associated Press on Saturday. "But I think he was successful and he did what he wanted to do. I wanted him to go in peace and I am thinking of the family today, what they go through."

Eventually Brand grew to like Mandela and smuggled in special treats like bread and Mandela's favorite hair pomade. Brand even sneaked in Mandela's infant granddaughter so that the prisoner could hold her.

For his part, Mandela encouraged Brand to continue his education and maintained an interest in him and his family.

Years later, when Mandela was president, he took special care to single out Brand for recognition while Brand was a lowly civil servant while South Africa's new constitution was being drafted. Mandela flew in by helicopter and entered the room where members of parliament were debating the new constitution, said Brand.

Mandela went around the room shaking hands with parliamentarians but when he saw Brand, who was distributing documents, Mandela lifted his arms and warmly greeted him.

"He immediately made a big announcement to everyone: 'You know who is this person? This person was my warden, this person was my friend.'" Brand said he felt very humble and proud at that moment. After that when the parliamentarians went out for a group photo, Mandela insisted that Brand be in the photo. "He said 'No, no. You must stand next to me, we belong together.'"

Brand once again works on Robben Island which is no longer a prison but a bustling tourist attraction. He and other former guards and prisoners tell visitors about the new South Africa's racial reconciliation.

Brand said he shared a joke with Mandela about his final resting place.

"I say to Mandela that we must bury you on Robben Island. Then he just laughed. He said 'Why? For tourist attraction?' He said 'You should have made money. But I think I must go to Qunu.' That was him making a joke."