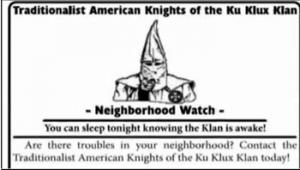 A federal court has ruled that an eastern Missouri town cannot ban the Ku Klux Klan from passing out fliers. Photo Credit: salon.com

Ku Klux Klan flier distribution has been upheld by a federal court ruling. For the second time this year, a federal court has ruled that the eastern Missouri town of Desloge cannot ban the Ku Klux Klan – or any other group – from passing out fliers.

The preliminary injunction issued on Tuesday stops Desloge from enforcing an ordinance that prohibits the distribution of leaflets on the street. The ruling was in response to a lawsuit filed by the American Civil Liberties Union, which argued that the ordinance violated the First Amendment right to free speech.

The ACLU initially sued the town on behalf of the KKK in 2012, after the white supremacist group was barred from passing out leaflets to motorists on the street. A federal judge struck down Desloge's original ordinance. Desloge then revised the law, but the ACLU challenged the revision, claiming it also violated free speech.

"As the court recognizes, the Supreme Court has regularly held that streets and sidewalks must remain open to public expression," Jeffrey A. Mittman, executive director of the ACLU of Missouri Foundation, said in a statement. "While it might be understandable that city officials don't like this group's message, the ACLU is committed to defending the free-speech rights of all, regardless of their message." 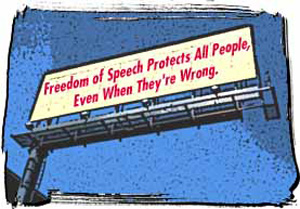 "This is about pedestrian safety," Camp said Wednesday. "When you have groups and organizations that stand in the middle of an intersection handing out fliers, it's a dangerous proposition. It's just asking for something bad to happen. "We're trying to prevent someone from getting hurt," Camp said.

City leaders haven't yet decided whether to appeal the ruling. "We're reviewing our options," Camp said. Desloge is a town of about 5,000 residents in St. Francois County, about 60 miles southwest of St. Louis.

The ACLU won a similar suit last year on behalf of the KKK against another Missouri city, Cape Girardeau. And earlier this year, the ACLU reached a settlement with Poplar Bluff, Mo., after resident Brian Becker was ticketed for leafleting in opposition to a sewer bond initiative. Poplar Bluff agreed to rescind its anti-leafleting ordinance.