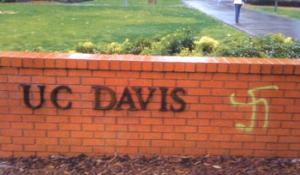 There has been an increase of racially motivated and hate crimes occurring on college and university campuses across America. UC Davis is the most recent. Photo Credit: chicagotribune.com

Racially motivated hate crimes are continuing on college campuses across America. Officials at the University of California, Davis, are investigating an apparent hate crime on campus earlier this week.

Someone wrote a racial slur on a chalkboard inside a campus building as part of an incident that included 31 broken windows on cars and buildings across campus, UC Davis Police Chief Matt Carmichael said.

"Part of this was a hate incident. Somebody went and put a very directive racial slur inside of one of our facilities on a chalkboard," according to Carmichael. "Broken windows, broken buildings we can fix those. Hurtful speech in our community has a lasting, longer effect."

UC Davis Chancellor Linda Katehi expressed her concern about the incident in a statement emailed to students and also posted on the school's website. She noted it happened at a time when the nation is celebrating the 50th anniversary of the March on Washington.

"I am incensed and at the same time, heartbroken, that this occurred this week in particular – a week where we acknowledge one of the greatest moments in American Civil Rights History," Katehi said. "UC Davis is guided by Our Principles of Community where 'we reject all manifestations of discrimination and affirm the inherent dignity in all of us.'

"It has been said before, and I again repeat, no act of hate will be tolerated at UC Davis," she continued.

Katehi asked for anyone with knowledge of the incident to report it to campus police, which has stepped up its patrols.

UC Davis experienced a spate of such incidents three years ago, when swastikas were found around campus and a campus center for lesbian and gay students was vandalized.

In response to that and other racial- and ethnic-related incidents on campuses in San Diego and Irvine in 2010, the UC system created an advisory council on campus climate, culture and inclusion.