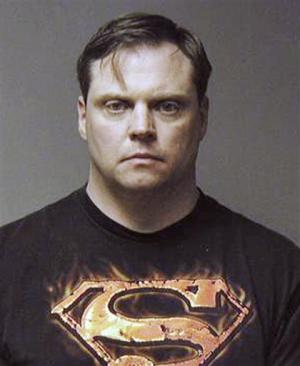 This photo released by the Department of Justice shows Richard Schmidt, 47. The FBI has alerted black and Jewish leaders in the Detroit area that their names were on a list kept by Schmidt an alleged neo-Nazi sympathizer. On Tuesday, July 9, 2013, Schmidt pleaded guilty in federal court in Toledo, Ohio, to possession of firearms and body armor by a convicted felon and trafficking in counterfeit goods. He is scheduled to be sentenced Oct. 31. Photo Credit: The Associated Press and Department of Justice

TOLEDO, Ohio (AP) - An alleged neo-Nazi sympathizer faces up to 10 years in prison after he pleaded guilty to illegally having a cache of weapons and counterfeit merchandise in northwest Ohio.

Richard Schmidt, 47, of Toledo, pleaded guilty Tuesday in federal court to possession of firearms and body armor by a convicted felon and trafficking in counterfeit goods, according to court records. Schmidt is scheduled to be sentenced Oct. 31.

At least seven high-capacity ammunition magazines were found at Schmidt's sports memorabilia store in Bowling Green, according to an FBI affidavit filed that month. Authorities also found counterfeit clothing and other goods marked with brand names such as the National Football League, Nike and Reebok.

Schmidt didn't dispute the allegations in court and grinned when the judge explained the effects of his guilty pleas, the newspaper reported.

It's unclear why Schmidt had the weapons. A message was left Wednesday for his public defender.

The FBI alerted black and Jewish leaders in the Detroit area that their names were on a list kept by Schmidt, who had previously served 13 years in prison for voluntary manslaughter. The notebook is among evidence that federal investigators said showed Schmidt might sympathize with neo-Nazis.

That issue did not come up during the Tuesday plea hearing, The Blade said.