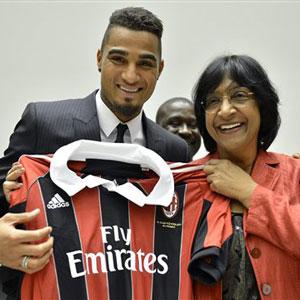 GENEVA (AP) - The ugly side of the beautiful game was exposed Thursday as the U.N.'s top human rights official joined football officials and players in calling for an end to the "crime" of racism in sport.

U.N. High Commissioner for Human Rights Navi Pillay said the world is a long way from achieving that as evidenced by a series of incidents including racist insults and chants, Nazi salutes, petitions against players, and denial of hiring based on color or ethnicity and have no place in football or any other game.

"Sport, at its best, is inclusive, generous-hearted, and fundamentally multicultural, based on values such as teamwork, loyalty, merit, and self-control," Pillay told a crowded forum at the U.N.'s European headquarters in Geneva, where she was flanked by AC Milan player Kevin-Prince Boateng, former France captain Patrick Viera and several FIFA and European football officials.

Several officials said they were taking real action, not just paying lip service to the problem, through actions such as FIFA anti-racism task force.

Boateng recalled how he felt "angry and offended" when he kicked the ball into the stands and led teammates off the field to protest being abused by fans of Italian fourth-tier team Pro Patria during a friendly match in January. He credited his teammates' uniform backing of his impromptu protest with sparking broader international outrage.

"Racism can be found on the streets, at work and even in football stadiums. There were times in my life when I didn't want to deal with this subject. I tried to ignore racism, similar to a headache that you know will go away if you just wait long enough," he said. "But that was (a) misconception. Racism does not go away. If we don't confront it, it will spread."

Everyone should tell it as it is, Vieira echoed.

"Racism is unacceptable. It's a crime which has no place on the football field or in any sporting event," he said. "Racist insults are frequent, very frequent, in fact more frequent than people think. ... No part of the world is spared."

But what to do about it? UEFA adviser William Gaillard said the sport mirrors society, and racism requires collective action, but he did not lay out specifics. Federico Addiechi, FIFA's head of social responsibility programs, said strong words are not enough.

"We know fines are not and may not be enough. Deducting points from a team could send a very strong message. Relegating or eliminating a team from a competition can send an even stronger message," Addiechi said.

Pillay said the now-infamous incident involving Boateng, replayed on YouTube and on a huge overhead screen Thursday at the start of the hour-long U.N. discussion, shows the unfortunate continuation of deeply unpleasant acts during sport events, including during football matches.

"These deplorable acts of bigotry and violence have no place in the 21st century. They are an affront to human rights" that are illegal under international human rights laws, and are "particularly damaging" because of the importance of athletes and sporting events for young people, Pillay said.

"There must be accountability for racist offenses" in sports, she added. "It is a crime and must be treated as such by sports authorities. ... The time to kick the bigotry out of football is now."