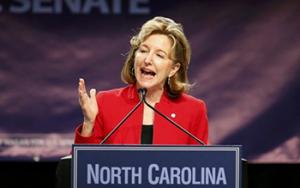 Speaking to delegates of the state's largest predominantly black denomination, Hagan pressed her case for re-election to pastors and other church leaders influential in their communities. Strong black voter turnout is considered key for Hagan and other Democrats. Photo Credit: ph.news.yahoo.com

Black voters will determine Democratic victories in those highly contested Congressional and Senatorial races across the country next Tuesday. Candidates are making their strongest push during these last days leading up to the Mid-Term election to get the black vote out. Low voter turnout, especially among minorities, is usually the case unless there is some highly galvanizing issue is at stake.

Democratic U.S. Sen. Kay Hagan told black Baptists on Wednesday she wants to protect their voting rights and promote equality while her rival Thom Tillis and his Republican allies want to put more obstacles at the ballot box.

Speaking to delegates of the state's largest predominantly black denomination, Hagan pressed her case for re-election to pastors and other church leaders influential in their communities. Strong black voter turnout is considered key for Hagan and other Democrats.

"I can only win this election with your help," she said at the close of her speech to the General Baptist State Convention, which had nearly 1,300 delegates there.

Hagan reminded them that Tillis as House speaker helped pass the 2013 law that reduced early voting by one week, ended same-day registration during the early-voting period and eliminated out-of-precinct voting on Election Day. Hagan had urged U.S. Attorney General Eric Holder to sue over the law, which he did along with other groups. 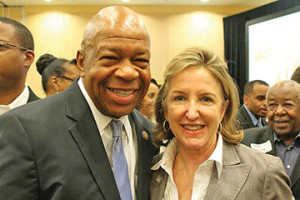 The case is still pending but the U.S. Supreme Court declined to block provisions of the law for the election Tuesday. Many meeting attendees lived through the civil rights era of the 1960s.

Tillis and other Republicans have called the 2013 law common-sense changes and said the changes will ensure the integrity of the voting process, including a photo identification requirement to vote beginning in 2016.

Hagan also said she has tried to increase funding for historically black colleges.

As she has for months, Hagan blasted Tillis for several portions of the Republican legsialtive agenda in Raleigh. She criticized Tillis for refusing to take up a bill in the state House requiring businesses pay men and women the same for similar work. Tillis has said current discrimination laws should be enforced.

"I will never back down when someone tells me that we don't need laws to give women equal pay for equal work," she said to applause.

Equal pay in the workplace not only affect women, but blacks and other minorities as well.