The history of May Day begins with the celebration of dancing around the maypole. A worldwide tradition dating back to ancient times. Photo Credit: lisaracz.wordpress.com

Spring is perhaps humanity’s most celebrated season. Ever since the Greek tale of Persephone and Hades, civilizations have celebrated the end of winter’s cold and dark in favor of spring’s increased light and warmth. Whether they are ancient rites or modern, spring customs abound throughout the world.

Two of the oldest and most well-known spring customs are April Fool’s Day and May Day. Some feel that April Fool’s Day derives from the ancient Roman nature festival of Hilaria, which was held around that date. The idea of “fooling” – playing practical jokes – possibly originated in France, when the New Year was moved from March 25 to January 1 in accordance with the Gregorian calendar. The old New Year’s season had ended on April 1, and even with the date change, playful people still showed up on April 1 for “official” New Year’s visits with silly gifts.

May Day probably stretches back to prehistoric times when people celebrated the greening of the earth. The Roman flower festival of Flora and the Druid festival of Beltrane combined in the British Isles to produce the most well-known May Day symbol, the Maypole. There are numerous theories about the Maypole’s meaning from a celebration of the earth’s renewal to a representation of the earth’s axis to a phallic connotation. The Jack-in-the-Green figure, currently enjoying a revival in England, is thought to represent fertility and the natural world.

In Sweden on May Day, it was once traditional for people dressed as Summer and Winter to fight. Women in centuries past believed that washing their face in dew from the hawthorn bush in the pre-dawn hours was a beauty preserver. In the Ozark Mountains, it was thought that a female could see the face of her future mate by going to a spring on May Day and putting a guinea hen egg in a cup into the water.

Some civilizations consider spring the beginning of the New Year (instead of having it occur in the dead of winter). In China at the Lunar New Year, people hang long rolls of red paper with black writing and drawings of ferocious beasts on either side of their front door. This curries favor with the gods Shen Tu and Yu Lei, who are protectors from evil spirits.

In Iran, the start of the New Year – known as Nowruz, No-Ruz or No-Rooz - happens during the March equinox. It lasts almost two weeks, and is a time of new beginnings. It is customary to clean and repair homes, and buy new clothes.

In Thailand during the custom of Songkran old things are thrown out and burned. They wash statues of Buddha with perfumed water, then parade them down the street, with more water thrown on them. This morphs into a gigantic water fight with people drenching each other in the spirit of good fun.

In the United States, a popular spring custom includes shad planking (smoking the fish over wood planks with an open flame) to celebrate the beginning of fishing season and the renewal of water with life. This is one of the major celebrations held near Wakefield, Virginia, but other states, such as New Jersey enjoy the annual Lambertville Shad Festival. 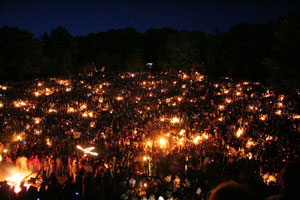 Walpurgis Night (famous to Dracula aficionados) is a spring custom marked by bonfires and fireworks all over central and northern Europe around April 29, the night when witches gather to await spring’s arrival. In Stockholm, Sweden, the event is a two-day party, marked by parades and singing as well as the traditional ways.

Speaking of Dracula, in Transylvania the Romany people customarily cut down a small willow tree on April 23, and take it to a central place to decorate it with flowers and leaves. The elderly and sick spit on the tree three times, hoping for health and long life. Pregnant women lay a piece of clothing underneath it. If a leaf falls on it by next morning, it foretells an easy childbirth.

At Holi, Dehli, the custom during their spring festival is to dress in old clothes and throw pigment powder over everybody and everything.

What would Spring – or life, for that matter – be without cheese? At Cooper’s Hill in Gloucestershire in the United Kingdom on Spring Bank Holiday, participants chase a wheel of Double Gloucester cheese rolling down the hill. Although not held in 2011, but how long can you keep a good cheese – or a good custom - down?

There are many spring customs throughout the world celebrating this season of renewal and rebirth.