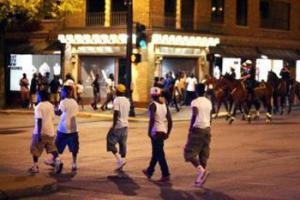 The crisis of black teens gathering in upscale shopping centers during the hot summer months got off to an early start in Kansas City, MO. Photo Credit: theconversativetreehouse.com

The challenge of what are black teens to do in the summertime came early in Kansas City this year on Valentine weekend. A crowd of more than a hundred teens strolled along the main street of a prime piece of Kansas City's real estate, the Country Club Plaza, proclaiming, "We are back, only earlier this time."

Really, Kansas City, what do you expect?

Several years ago, the scene was Westport where hundreds of black youths would converge on weekend nights, crowding the streets from one end to the other. While proprietors and patrons alike acknowledge for the most part the young people, ranging in age from 10 to 24, were well behaved, their presence nonetheless was perceived as disturbing and menacing.

Even though, there might be one or two unsavory and unruly acts incited, that is all that is needed to get media attention and escalate the uneasiness. 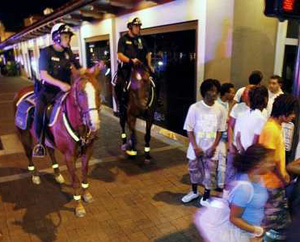 Many meetings were held back then, and no doubt even now, among community leaders, concerned businesses along with government and law enforcement agencies, but what have been the results? Has the problem just moved a few blocks down the way?

The Mayor and Chief of Police have declared that black teens loitering on the Plaza will not be tolerated. Curfews will be rigorously enforced and parents will be forced to be more accountable.

But, for how long, and to what avail? Until the next crowd grows larger and more unruly as the summer months heat up?

Enforcement of curfews and penalizing parents are hardly the solution to decades of benign and not-so-benign neglect of a large segment of the Kansas City community. For starters, where are the venues for teens and youth in the urban core?

Where are the bowling alleys, the skating rinks, skate board parks, arcades, movie theatres, recreational centers and other opportunities for youth to have meaningful, fun and enriching activities? Many venues could be family oriented. Parents need not drop off their kids. They can enjoy outings with their children.

Like urban core areas across the nation, there are many areas that are ideal for development of great activities that would be within reach of many youth and teens where now there is nothing but blight and empty lots and buildings. There is truth in another old adage, "If we build it, they will come."

Black youths are gathering and congregating in downtowns and upscale venues in cities all across America, committing random acts of violence or just causing menacing mayhem. According to some reports, this racial violence and lawlessness are part of a nationwide pattern of hundreds of episodes that have occurred in more than 50 cities during the last several years. 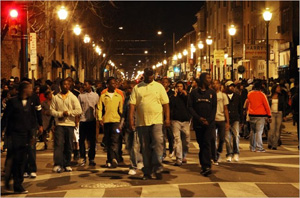 But what are we to expect after persistent and pernicious poverty, joblessness, poor educational opportunities, blighted neighborhoods and a whole sea of hopelessness that have plagued one generation after the other of black Americans?

Like many cities across America, Kansas City faces the same problems, long ignored. Treating the symptoms with more stringent curfews and badgering beleaguered parents will not result in a lasting solution.

History has shown us time and time again, the oppressed, too, shall and will rise.

Why wait until a community suffers significant economic lost, escalated violence and the specter of policemen on horses riding on the streets of a City's prime attractions before there is finally a commitment to invest meaningful resources in communities that most need it?

Kansas City, like many other cities, is running out of time.

is this article saying that kansas city needs to add more things to do for the black community? because i can understand why curfews have been enforced if they are just going to be committing random acts of violence..

They made it sound like they are only going to enforce the curfews on black kids. Also, them adding things for the black community is just as racist as them enforcing curfews on blacks.

If we target the blacks and adding things they can only do that is totally racist. I think they are gong to enforce the curfew on all teenagers at least that is what they should do. Some white kids get into a lot of trouble during the night. Every single person no matter what race can get into trouble during the night hours, so maybe come up with more things that teenagers can do besides walk the streets.