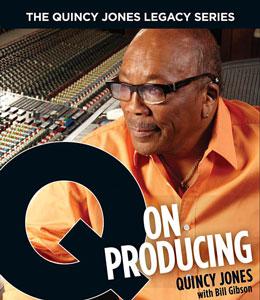 Despite having published three books, Listen up: The Lives of Quincy Jones, Q: The Autobiography, and The Complete Quincy Jones: My Journeys and Passions, producer, composer, arranger, humanitarian, Quincy Jones has never really talked exclusively about how he makes music – until now.

The first installment of The Quincy Jones Legacy Series, Q on Producing is a beautifully illustrated work full of Jones’ instructions and insights on music making, co-written by Seattle-based author/producer/engineer Bill Gibson. Jones cites diverse individuals who musically made him what he is: from his Seattle high school bandmaster Parker Cook, and Ray Charles, to Count Basie, Lionel Hampton, and Nadia Boulanger, the esteemed French classical teacher who instructed Stravinsky, and counted Jones as one of her most accomplished students. “I was fortunate to play all kinds of music in the beginning,” Jones writes … “because I learned that music has a very sincere purpose: to lift the spirit.”

Jones’ recalls many of his producing triumphs, from the sixties bubblegum pop of Leslie Gore’s “It’s my Party,” to Michael Jackson’s “Thriller,” and the all-star mega hit “We Are The World.” The book also highlights the amazing cast of musicians, composers, arrangers, and engineers that have shaped the Q sound: specifically, Rod Temperton, composer of “Thriller,” and engineer Bruce Swedien, the creator of the Acousonic Recording Process. A companion DVD features Jones and the co-author analyzing some of Jones’ selections from his critically-acclaimed recordings including Body Heat, The Dude, and Soul Bossa Nova.

Jones’ instructions, insights, and maxims range from the spiritual (“I think music is the word of God.”) to the scientific (“[m]usic is played in free style from the soul, but it is based on mathematical relationships between pitch and time”) and the down-home (“I talk a lot now, but I used to sit down, shut up, and listen.”) Throughout the book, Jones stresses the fundamentals of musical education as the foundation for his career, highlighting the 28 years he spent honing his core skills studying instrumentation, melody, harmony, antiphony, and composition. He’s primarily speaking to young people, because he knows the historical-cultural void they live in, and he’s letting them know that his amazing career is the result of hard work, devotion to craft, and relentless curiosity, and study.

Bill Gibson writes, “Quincy’s words are encouraging, motivational, and inspired; his methods are original and efficient. His legacy is powerful, and so are the lessons he shares about life and making music.”