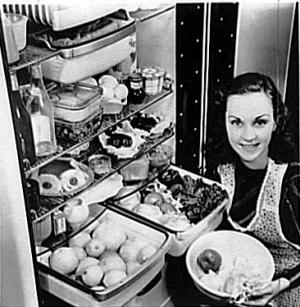 “Would you like a beer?” My father asked my new husband and me on a warm Indian day. “It’s American.”

The question took us by surprise. American beer was not something I expected my father to offer us at his farm north of New Delhi.

Then again, I hadn’t expected the German chocolate cake with candles that had been waiting for us when we arrived, either—exhausted from the 24 hours it had taken us to travel from California to India the day after our wedding. A back injury had prevented my father from attending the ceremony.

“But we got it just for you,” my cousin Chundun exclaimed. “All Americans drink beer. It’s Fosters. We bought a case.”

And that’s when the light bulb came on.

From the time my twin sister and I, had left our San Diego home for different colleges, my German-American mother had made a point of having Coca-Cola in the fridge, Chunky Monkey ice cream in the freezer, and Oreos in the cabinet when we visited.

It didn’t matter that my sister and I have never bought these items for ourselves, or that our tastes are much healthier. Our mother believed these to be among our favorite foods. So up until she went into the nursing home last year—if we visited, regardless of whether she was in California, or later in Florida—we knew what was in the cupboards.

Though divorced for more than 20 years, my dad had taken a page from my mother’s playbook. He had stocked up on treats he thought we would like, filling the sometimes—running farmhouse refrigerator with cans of beer, the aforementioned cake, and a vat of rice pudding.

For both of my parents, filling the refrigerator with treats for their kids was an act of love. Although she lived on a fixed income, my mother always found the coin to buy what she thought her babies wanted. And my dad? Well, there are no supermarkets in rural India. In order to get the beer and the cake, he had to have someone travel more than an hour each way to the nearest town.

In the two weeks we were there, my husband and I did not come close to finishing the case of Fosters. My dad offered it to us at teatime every afternoon and at dinner. We drank several cans out of courtesy. I was, however, smart-aleck enough to tell him that Fosters is Australian, not American beer. But now, I wish I hadn’t taken that little pleasure away from him.

Last September, a little more than a year after our wedding trip, I returned to my father’s farmhouse for his funeral. Rummaging through the refrigerator one afternoon, I found a can of Fosters, forgotten, way in the back. Although it was bitter, I popped the top and drank it. After all, my father bought it just for me. No matter what your ethnicity may be, love is the one tool that crosses all ethnic customs.