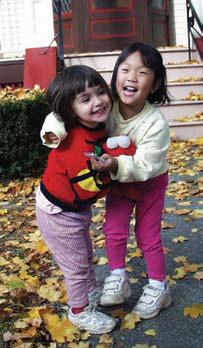 Kids enjoying life and not worrying about racial or ethnic issues

“Agua”, the Spanish word for water sounds very much like the Samoan word “aua” which is an order to stop — especially if spoken by a toothless 2-year-old. Imagine my native Spanish-speaking mother’s reaction when our oldest daughter, Chloe, repeatedly said “aua” to her one morning while having her masses of wavy hair combed. My mom offered her water, pointed to the water cooler, and even ran the faucet in the sink in an effort to decipher what Chloe was trying to say. However, all Chloe wanted was for her to stop.

A couple of weeks after this incident, Chloe spent some time with my in-laws and the innocent near homonym reared its mischievous little head again. Chloe pointed in the direction of the kitchen and said “agua” but try as they might, her native-Samoan speaking grandparents could not figure out what she wanted stopped.

To this day, the agua/aua story is a family favorite, but there are other stories like the “oso tale.” We were on vacation in Mammoth Mountain, Calif. All of us were playing in the snow outside our condo when our second daughter, Thessa, who was 4-years-old at the time, began shouting “Oso, Daddy, oso!” My husband thought she was telling him to jump: “oso” is the Samoan word for “jump.” My husband was happy to entertain her. In fact, she had actually spotted a brown bear coming our way. “Oso” is both Spanish for bear, and Samoan for jump.

These stories help illustrate the difficulties of raising children in a multicultural household. Many forward thinking parents make it a point to expose their children to a second language other than English with goals ranging the gamut from academic preparedness, employment marketability, and even just as a sign of privilege.

For other families like ours, raising multi-lingual children is just one way for us to ensure that our kids are accepting and aware of their diverse cultural heritage. My husband and I are not too concerned with our kids’ future money-making skills at this point. We just want them to be able to understand the languages of our multicultural roots. We fiercely compete with English taught at school, spoken on the streets, and used exclusively in the media. It is our duty to keep Spanish and Samoan alive in our home for the sake of preserving the cultural heritages of our youth. Both languages honor our families’ ethnic ancestry.

While bi-literacy is definitely an attractive long-term goal, the bottom line for us is that our kids can communicate in both Spanish and Samoan just as well as they do in English as well as understand their multicultural heritage.

For now, as long as they alternate their nightly prayers in all three languages, my husband and I will be happy.