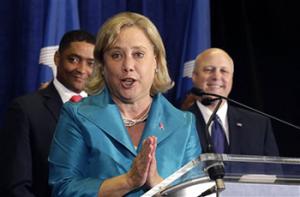 In this Oct. 20, 2014, photo, Sen. Mary Landrieu, D-La., speaks at a campaign event for her senate race in Baton Rouge, La. Landrieu said Monday, Oct. 27, 2014, that she is "not backing up" from President Barack Obama, but she also insisted that she had a record of bipartisanship during Louisiana's latest Senate race debate. Photo Credit, Gerald Herbert, File.

The Obama health care law, often referred to as "Obamacare" has a staunch supporter in U.S. Sen. Mary Landrieu and she has doubled down on her support for the federal health care law even as polls show the revamp remains unpopular in Louisiana and a new Republican attack ad launched Tuesday hits the Democratic incumbent again for her vote.

Although criticism of Landrieu's vote for the law known as "Obamacare" has continued throughout the election season, the three-term senator hasn't sidestepped the issue. In the latest Senate race debate Monday night in New Orleans, Landrieu offered a direct defense of the law in advance of the Nov. 4 election.

She said while the health overhaul needs adjustments, it will improve health care access.

"I'm telling you this is a good bill. It's not perfect," Landrieu said. She added: "I will defend it. I will improve it. And I will fight for it."

Landrieu is a target for national Republicans as they seek to regain control of the Senate. She is the only Democratic statewide elected official in Louisiana, which strongly supported Mitt Romney in 2012. If no candidate gets a majority of the vote next week, the Senate race will head to a Dec. 6 runoff.

Landrieu's GOP opponents, U.S. Rep. Bill Cassidy and retired Air Force colonel Rob Maness, have repeatedly attacked her on the health care law. Both are campaigning on repeal of the law and accuse Landrieu of being a rubber stamp for Obama. 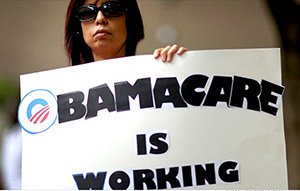 In the New Orleans debate, which Cassidy didn't attend, Maness described the law as "an abomination" and a job-killer for small businesses. To lower health care costs, he said, Congress should not mandate coverage but consider allowing people to buy insurance across state lines and keep their insurance when they change jobs.

Landrieu said the law is "based on free market principles." She said she'd like to see a lower-cost set of insurance plans offered, but also defended existing coverage options.

"Seventy percent of the people in our state, households, make less than $50,000. The Affordable Care Act is the first act that's given those families a chance to buy insurance, and the average premium is $83 a month for them. That's affordable," Landrieu said.

Despite Landrieu's continued support for the health law passed in 2010, the issue isn't a winning one in her home state.

More than 100,000 people in Louisiana signed up for private insurance coverage through the federally-run marketplace created by the law, which offers subsidized options for people who don't get insurance through their jobs or a government program like Medicare.

But Republicans point to double-digit premium hikes for many of those policies next year and penalties for people who refuse to get insurance.

Meanwhile, much of the expanded coverage authorized through the federal law hasn't trickled down to Louisiana. Gov. Bobby Jindal, a Republican considering a 2016 presidential campaign, has refused to expand Louisiana's Medicaid program, rejecting the federally-funded coverage that could have been offered to the working poor.