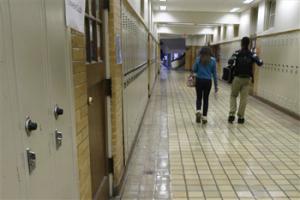 In this Monday, Jan. 13, 2014, file photo, two students walk in a hallway at Little Rock Central High School in Little Rock, Ark. Arkansas can stop making payments in one of the nation's most historic desegregation efforts, a judge has ruled, but he cautioned work remains to ensure students in the Little Rock area receive a proper education. Photo Credit: The Associated Press, Danny Johnston, File.

Are schools still segregated in Little Rock, where the fight to integrate schools began in 1957, as well as in other cities across the nation? Five decades and $1 billion after an infamous racial episode made Little Rock, Ark., a national symbol of school segregation, the legal fight to ensure that all of its children receive equal access to education is almost over.

But many challenges still remain, in Little Rock and across the country.

Some of the city's affluent white neighborhoods have better schools. The district's black students on average have lower grades and test scores and more disciplinary problems than white students. And racial divisions linger within the integrated Central High School, where riots erupted in 1957 as Gov. Orval Faubus tried to prevent black students from entering.

A day after a key desegregation lawsuit was settled, such stubborn disparities raised the question: Do all children in Little Rock now receive a high-quality education? "No," said Joel E. Anderson, chancellor of the University of Arkansas at Little Rock, who led a task force that produced a 1997 report on the future of the city's public schools.

"The plaintiffs in the lawsuit and school district officials have all made a monumental effort to achieve equal educational access for all children in the district, but there is still a considerable distance to go," Anderson said by email. He said that the opening statement of the report still stands: If the people fighting for equality in 1957 could look ahead to the current Little Rock School District, "they almost certainly would have said, 'No, that is not what we are seeking.'"

The extra funding has helped make Central High School one of the nation's best public schools. Its advanced classes serve as a major draw for white students who live far from campus and make it the flagship school for the city, if not all of Arkansas. "We produce more nationally recognized scholars than any part of the state," Superintendent Dexter Suggs said Tuesday.

But at middle schools with a higher percentage of black students, twice as many students score "below basic" on standardized math tests at the end of eighth grade - a pattern that repeats across grades and subjects. 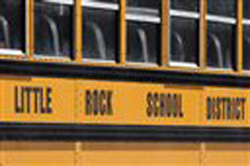 Data from the state Education Department that tracked students between their high school years and their first year of college showed that students from the area's private high schools were better prepared for college and scored higher on the ACT college entrance exam. Using data from 2011, the most recent year available, all but one private school had at least a quarter of its students meet all of the ACT's pre-college benchmarks.

No public school in the county reached that mark - not even Central - and the schools that had the highest percentage of black students fared worst on the test, with less than 6 percent of its graduates ready for college.

"The problem is not solved yet," said John Kirk, chairman of the history department at the University of Arkansas at Little Rock, who has studied the history of desegregation in the city. He noted that while the city is roughly 47 percent white and 42 percent black, the school population is two-thirds African-American, which means that many white students are choosing private or charter schools.

"You might say that shows a big imbalance in the schools," Kirk said. "On the other hand, you might say that litigation and federal oversight has helped to keep a third of the white students in the district."

Since the 2011 data on early college performance was collected, Suggs said, the district has changed the administration of the city's worst-performing high schools. "You will be able to note the difference ... with the understanding that this is a marathon and not a sprint," he said.

The connection between housing patterns and the district's racial makeup is one reason why today's problem is much more complex than simply ending segregation laws that prohibited black and white students from learning together. Those were the laws that Faubus was fighting to uphold when he called out the state National Guard and stood in the Central High School door to prevent the first black students known as the "Little Rock Nine" from enrolling.

The end of such laws means that "the number of segregated public schools in the United States today is zero," said Roger Clegg, president of the Center for Equal Opportunity. "There is no public school in which by law only children of a particular race are admitted." 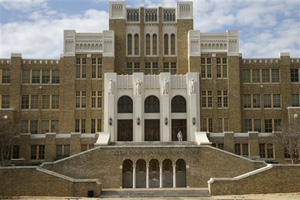 "There are schools that have a de facto racial 'imbalance,' but that's very different," he said by email. "Racial imbalance can happen for a variety of reasons, including but not limited to housing patterns that have nothing to do with racial discrimination. That is a distinction with a very big difference."

Others, however, see such imbalances as unacceptable for any reason.

Gary Orfield, co-director of the Civil Rights Project at the University of California Los Angeles, said that a pattern of whites moving out of black cities, several Supreme Court decisions and the end of various desegregation efforts have created "resegregation" of schools across the country along racial and poverty lines. "It's a tragedy for the country," Orfield said.

"We're not doing anything much to actually produce lasting integration of our schools or our neighborhoods," he said. "That needs to be defined as a goal for the country, if we're going to be this profoundly multiracial country and not be profoundly unequal."

Anderson, the university chancellor, said the settlement opens the door to new opportunities. "Let new indigenous mechanisms and processes emerge," Anderson said. "Let the superintendent, the principals and the teachers do their jobs with a minimum of oversight. Take away the excuses offered by all the micromanagement that has come from all levels - court, state, school board, and district central administration."

"Little Rock's school challenges are not so great," he said, "that the community cannot get its arms around them."

In the beginning of the article when it states that black students have lower grades and more disciplinary problems than whites, i wonder if that is because the the black students feel that they aren't getting the same education as every other child and it's a way of "rebelling."

It's sad that we are still having these problems. We should be way passed this, schools should not be segregated. People fought this battle a long time ago and it should of been fixed a long time ago. We are all humans no matter what our race or ethnicity therefor we should all have the same rights and privileges.