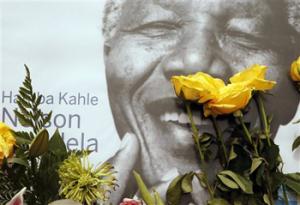 An eclectic mix of world leaders including President Barack Obama and Cuban President Raul Castro will eulogize Nelson Mandela before a crowd of nearly 100,000 mourners at a massive memorial service Tuesday in the World Cup soccer stadium where the anti-apartheid champion made his last public appearance.

"What a fantastic gift God gave to us in this Mandela, who quickly became an icon, a global icon of forgiveness, of generosity of spirit," Archbishop Desmond Tutu told a gathering Monday at the Nelson Mandela Centre of Memory.

"He really was like a magician with a magic wand, turning us into this glorious, multi-colored, rainbow people."

Nearly 100 world leaders and tens of thousands of South Africans of all races and backgrounds were expected to pay their respects to the man who bridged this nation's black-white divide at the FNB stadium in Soweto - a locale heavy in symbolism as the black township that was at the center of the violent struggle against apartheid.

The 95,000-capacity soccer venue was also the spot where Mandela made his last public appearance at the closing ceremony of the 2010 World Cup. His body will then lie in state for three days at the Union Buildings in Pretoria - once the seat of white power - before burial Sunday in his rural childhood village of Qunu in Eastern Cape Province.

South African authorities rushed Monday to deal with the complex security, logistical and protocol challenges of hosting what promised to be one of the largest and most prominent gatherings of world dignitaries in generations. Besides Obama and first lady Michelle Obama, former presidents George W. Bush, Bill Clinton and Jimmy Carter were to attend Tuesday's memorial, along with Laura Bush and former Secretary of State Hillary Rodham Clinton.

At the stadium, workers busily constructed a stage protected by bulletproof glass and police promised "thousands" of officers would secure the stadium. Still, security appeared lax Monday as the owner of a private security company scrambled to hire guards for Tuesday's event, using his car as a mobile office.

George Mathabe, manager of the Sidas security company, said 1,500 guards would be on duty Tuesday.

"I'm doing this from the bottom of my heart, just to thank Tata," Mathabe said, using the Xhosa word for father as an endearment for Mandela, who died Thursday at the age of 95.

Mourners were already camped out Monday to be the first ones inside the Soweto stadium, where roads were to be closed for several square miles Tuesday. Authorities expect overflow crowds to watch a live broadcast of the event at nearby stadiums. 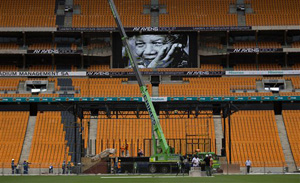 "We will be on hand to make sure people are able to grieve in a safe environment," Makgale told The Associated Press.

"Whether we have 10 heads of state coming, or 70 or 100, we do have the capacity and plans in place to facilitate their movement," he said.

Besides Obama and Raul Castro, eulogies were to be delivered by U.N. Secretary-General Ban Ki-moon and Chinese Vice President Li Yuanchao. Other speakers include the presidents of Brazil, Namibia and India, as well as tributes from Mandela's grandchildren. South African President Jacob Zuma is to give the keynote address.

British Prime Minister David Cameron and deputy Prime Minister Nick Clegg, French President Francois Hollande and his predecessor Nicolas Sarkozy, Zimbabwean President Robert Mugabe and the prime ministers of Canada, Italy and Australia were among the nearly 100 heads of state, government and ministers who have confirmed their attendance, the government said.

The predicted turnout brought comparisons to the 2005 funeral of Pope John Paul II, which drew dignitaries from more than 80 countries, as well as a crowd of 300,000 people who filled St. Peter's Square. Millions of others watched on giant video screens set up across Rome.

Though security remains a concern, an AP reporter walked unsearched into the stadium Monday by showing only a national press card issued in Europe. It took about three minutes before a security officer asked journalists to leave the field, though reporters freely roamed stadium aisles to watch the ongoing stage construction.

South Africa's parliament held a special session Monday in honor of Mandela. Kgalema Motlanthe, the country's deputy president and a member of Mandela's African National Congress, opened the proceedings with a speech describing how the former leader's death caused a "sweeping feeling of sorrow" around the world.

"He belongs to all humanity," Motlanthe said. "Mandela's ideals saturate the face of the Earth."

"He has handed the baton to us and we dare not drop it," she said.