Hispanic eighth-grade students in New Jersey have made significant progress in closing the achievement gap with white students, according to the National Assessment of Educational Progress (NAEP). Photo Credit: american.com

New Jersey students scored among the highest in the nation this year on a standardized test often used to compare states' educational performance, and the exams revealed that Hispanic eighth-graders have made significant progress in closing the performance gap with their white peers, according to results released Thursday.

New Jersey's eighth-graders ranked second in the nation for the average score of the National Assessment of Educational Progress on both the reading and math tests. Fourth-graders were fourth in reading and tied for sixth in math.

The NAEP tests administered this spring to fourth- and eighth-graders in a handful of schools in each state offered a wake-up call again. They are given every two years. While scores have been trending up over the last two decades, the majority of students failed to score as proficient or higher in reading and math this year.

New Jersey, like most states, is rethinking elements of its public schools. The New Jersey Education Association, the state's largest teachers union, often focuses on the best of the results – that students here outperform their peers elsewhere. Gov. Chris Christie and his administration, which are pushing for bigger changes, generally focus on the performance gaps, which persist between white students and blacks and Hispanics, as well as between students who do not qualify for free or reduced-price school lunch and those who do. 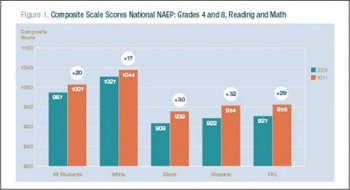 The gaps tend to be similar to the national ones. Hispanic eighth-graders significantly closed gaps with white students on both reading and math tests this year. The gap between the scores of white and Hispanic students also narrowed nationally. The results on other exams in New Jersey was mixed, with some gaps narrowing a bit and others widening, but none by statistically significant amounts.

New Jersey's student performances are slightly up or slightly down from 2011, depending on the exam. The trend over the last two decades has been upward, but scores have fluctuated over the last several years.

On the whole, New Jersey students topped the national marks on all four exams, but they left plenty of room for improvement.

Forty-nine percent of New Jersey students in both fourth and eighth grades rated as proficient or above in math, compared with 42 percent of fourth-graders nationally and 36 percent of eighth-graders.