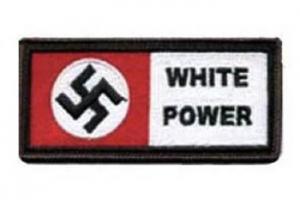 The white couple admitted that they conspired to intimidate a black couple and their children, painting a swastika and writing the words "White Power" on the family's driveway before throwing a Molotov cocktail and setting the home on fire. Photo Credit: aryanwear.com

INDEPENDENCE, Mo. (AP) - A suburban Kansas City man and woman have pleaded guilty to federal charges accusing them of violating the civil rights of a black family by setting their home on fire and painting a swastika on their driveway.

Independence residents Logan J. Smith, 25, and Victoria A. Cheek-Herrera, 34, pleaded guilty Wednesday in U.S. District Court in Kansas City to one count of conspiring to threaten and intimidate an Independence family from exercising their constitutional rights to reside in their home because of their race or color, and one count of violating the family's civil rights by committing a racially motivated arson.

The two admitted that they conspired to intimidate a black couple and their children on June 26, 2008, painting a swastika and writing the words "White Power" on the family's driveway before throwing a Molotov cocktail at the home. Before the incident, Smith also drew a swastika on his own head, prosecutors said.

According to their plea agreements, a juvenile acquaintance gave them the gasoline they used to fill a glass bottle before inserting a rag into the end to serve as a wick, lighting it and throwing it at the rented home.

Smith and Cheek-Herrera face a maximum prison sentence of 10 years without parole and a $250,000 fine for each count. No sentencing date has been set.

An attorney for the U.S. Department of Justice's Civil Rights Division helped prosecute the case.