Human Rights Watch Says Deportation Of Latinos Is Out Of Control 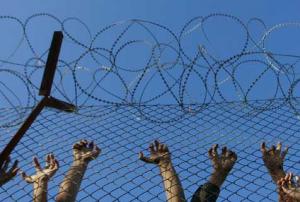 Imprisoning immigrants with minor or no criminal records before deporting them often affects people seeking to reunite with their families in the U.S. or fleeing persecution. Photo Credit: hispanicallyspeakingnews.com

As politicians courting the Latino vote, the Human Rights Watch advises the U.S. government to end the unnecessary prosecutions of “illegal immigrants.”

Imprisoning immigrants with minor or no criminal records before deporting them often affects people seeking to reunite with their families in the U.S. or fleeing persecution, notes the 82-page May 22 report, “Turning Migrants Into Criminals: The Harmful Impact of US Border Prosecutions,” which documents the negative impact of illegal entry prosecutions over the past 10 years.

According to the report, prosecutions for illegal entry and reentry now outnumber prosecutions for all other federal crimes. “The U.S. Department of Homeland Security (DHS), the agency that enforces US immigration laws, refers more cases for prosecution to the US Department of Justice than the Federal Bureau of Investigations (FBI), the Drug Enforcement Administration (DEA), the Alcohol, Tobacco, Firearms, and Explosives agency (ATF), and the US Marshals service combined.”

Many of those now criminally prosecuted for illegal entry have no criminal history or had only minor, non-violent convictions in the past. But they fear separation from their U.S .families, while large numbers spend months or years in overcrowded federal prisons, costing an estimated $1 billion annually in incarceration costs alone, according to the report.

“The US government turns migrants into criminals by prosecuting many who could be deported,” said Grace Meng, US researcher at Human Rights Watch and author of the report. “Many of these migrants aren’t threats to public safety; they are people trying to be with their families.”

Although international law does not prohibit the U.S. from criminal sanctions against unauthorized entry, United Nations human rights experts urge the use of civil law instead. The UN special rapporteur on the human rights of migrants stated in February 2013, “Irregular entry or stay should not be considered criminal offences: they may constitute an administrative offence, but they are not per se crimes against persons, property, or against national security. Irregular migrants, even smuggled migrants, are not criminals per se, and should not be treated as such.”