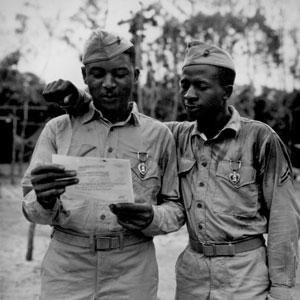 This photo shows two black soldiers during WWII reading what appears to be a letter from home. This is not a photo of Kenyon Parker, the black World War II veteran who is telling his story of defending his country during segregation. Photo Credit: www.defense.gov

FREDERICK, Md. (AP) - At age 88, Kenyon Parker still goes every day to the gym, where he shares stories of his time as a World War II soldier.

Parker was a junior in high school when Japan bombed Pearl Harbor. A year later, he enlisted and traveled to England, France, Germany, the Panama Canal, and the Philippines.

"I was glad to get away from home," Parker said. "Blacks were dirt poor. I came up in segregated times."

The family had little money; food and jobs were hard to get, he said. "By being drafted, that meant I could help my family and send money home."

The Army paid Parker $50 a month, and he sent more than half his earnings — $37.50 — home to his mother. He wanted to help with the family's living expenses, but his mother had different plans, Parker said.

While in the Army, Parker drove amphibious vehicles that operated on both land and water. Soldiers called them "ducks."

Parker has a photograph of his duck, taken in France where he helped to transport food and ammunition.

"We were youngsters then," he said. "They put you in this big truck and you are in charge of it."

After his discharge from the Army, Parker studied industrial arts at Delaware State University. He eventually found himself in Frederick County, where he taught "shop class" for about 40 years, he said.

He became a teacher when schools were still segregated. The Lincoln School provided local black children with an education, even though books in the school were second-rate.

Integration came later and so did Parker's membership to the Veterans of Foreign Wars in Frederick. In the 1950s, he paid about $200 to join, becoming one of the group's first black members. He celebrates that progress, but is concerned about the next generation of county residents.

Parker hopes they can learn from his story of sacrifice and honor.

"Now you have black pilots, captains, and everything," he said, smiling.