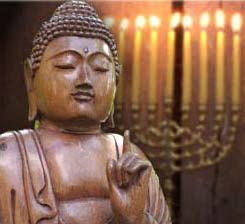 Celebrating the holidays in our Jewish-Buddhist home may sound more than a smidge unique, as my family enjoys a cultural conglomeration that includes telling Jewish jokes, feasting on Japanese pork, and gathering around a tinsel-covered Douglas fir that we buy “on special” at the Jewish market. However, I would not trade it for all of the matzah and mocha balls this side of the Pacific.

As my father is a Russian-Jew from Beverly Hills, and my mother a Japanese- Buddhist from Hawaii, they arrived at a creative compromise of enjoying the holidays with their four children in a secular manner. They always ensured that cuisine, art, festivities, and traditions from both cultures took center stage, alongside glimpses of Santa Clause, Buddha, and a Menorah that decorated our Los Angeles fireplace.

I have vividly fond memories of accompanying my father on ethnically exotic errands in preparation of our Holiday celebrations. One particular excursion I loved was going to the supermarket in our Jewish neighborhood to choose a Christmas tree from a very small selection; think Charlie Brown tree here.

“I’d like that one,” my father would tell Mr. Shwartz. “You know; the one that has some needles left on it.” By the time we got home, most of them had fallen off after we forced it into our ’72 Dodge Dart. But not to fear, Japanese chatckis, homemade fabric ornaments of angels, Jewish stars, and clumps of blinding tinsel always saved our trees, and made them as uniquely interesting as we were.

After tree shopping, we ventured to our favorite Jewish deli to buy fresh lox, pastrami, and borsht for our Holiday feast while we wished the other patrons a “Happy Chanukah.” As we did not belong to either Japanese, or a Jewish temple, the fusion of food from both cultures became an integral part of celebrating faith and family. A feast of brisket and a platter of searing sukiyaki helped to connect our family in a spiritual way.

One of our most challenging, albeit entertaining errands was to find a market in Los Angeles that sold the freshest fish possible; which could be more than a frustrating challenge for my father. Just imagine Larry David’s character on the show “Curb Your Enthusiasm,” haggling with Japanese market owners and then finally attempting to steal the display fish, and you get the picture. Oy Veh!

My mother, raised on a farm in Hawaii, enjoyed wild fish caught daily by her fisherman father off the Kona Coast, so fresh fish was a necessity in my house on Christmas day. “Do not come home today until you find me a salmon the size of a Buick!” my mother would yell to my father.

The subject and preparation of food was the only time my usually quiet Japanese mother showed a bossy side, and she gave my father a list as long as The Torah filled with complex and specific items. In both Jewish and Japanese cultures, food plays a near ritualistic role in securing and bonding our family together through generations, and as ours was an unusual multicultural union, food became that much more the center of our familial life, especially during the holidays.

I remember my Jewish friends who wanted so desperately to be a part of our Christmas festivities for the interesting, over the top antics of our celebration. One friend whined that “she just couldn’t take another Christmas day” in which, like most other Jews in L.A., she overate at a Chinese buffet restaurant, watched some matinee she didn’t want to see at the local theater mall, where she was then bombarded by some last minute Santa Clause’s asking her what she wanted for Christmas.

Gift giving at my home, while always a part of Christmas, was never the centered meaning of our day, but special and culturally bonding just the same. My two sisters, brother and I were each given what my parents called “the big gift,” and we also received the “family gift;” which included toys and games such as a gigantic Lego set, a special version of Monopoly, or the latest edition of The Encyclopedia Britannica. We received gifts that were culturally inclined from both parents, such as a silk kimono for each of the three girls, a samurai sword for my brother and from my father, history books about the plight of the Jews during World War II as well as classics by Jewish authors such as Chaim Potok and Dostoyevsky.

This year will be just as special, but different in both its spirit and flavor as so much joy and pain has transpired over the last year. Some members of the family have left us, some new ones are on board, and the beloved matriarch, my great-grandmother, who was always the “life of the party,” is too ill to attend.

But with the comforts of familiar cultural holiday décor, heart-felt prepared ethnic foods, and the tradition of our family getting together year after year, no matter what personal triumphs or tragedies have befallen us, we come, we share, and we feel a sense of belonging.

This year will be no different.