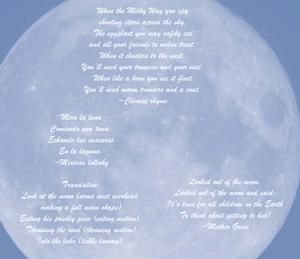 As a young child in Korea, I learned that dogs said “mung mung,” cats said “yow yow” and roosters screeched “ki-kirikee” at the break of day. Then my family immigrated to the United States and I discovered that American animals spoke an entirely different vocabulary, inspired by the same animal sounds but interpreted differently.

The same was true of the new folk songs and nursery rhymes I heard on the playground and later in the classroom. The language was different, but the underlying structures were familiar: Rhythmic, rhyming, repetitive chants that accompanied the clapping, hopping, counting, chasing and rope skipping games universal to children’s play. In the same way that Korean children sang “Open! Open the Great East Gate!” as friends passed under their linked hands, American children sang “London Bridge is Falling Down” with nearly the same cadence and gestures.

Decades later, I had a baby of my own. But when it came time to sing her to sleep or tickle her into a good mood, my husband and I found ourselves barely able to recall the words to “Twinkle Twinkle Little Star,” let alone “Wee Willie Winkie” or “John Jacob Jingleheimer Schmidt.”

The problem wasn’t with Mother Goose. The problem was that, for a child who is half Korean, a quarter Polish and the rest German, Native American and who knows whatall, whose favorite foods were hummus, bagels, quesadillas, kielbasa and miso soup, and whose friends and schoolmates came from every hemisphere on earth, Mother Goose was not enough. We didn’t limit our diet to the cuisine of one country. Why should we limit ourselves when it came to lullabies and nursery rhymes?

Happily, the problem was easily remedied. As I should have remembered from my own past, children’s lore is universal. Trips to the library and bookstore turned up collections of African riddle stories, Jewish proverbs, Russian folktales, Mexican fingerplays and Brazilian counting songs.

But books are not the only resource. We are lucky to live in an ethnically diverse and culturally rich country. Enlist neighbors, church members and grandparents, especially those who come from different traditions, to teach the songs, games and dances of other lands to your child’s class or scout troop. Expanding our children’s worlds is not only fun and fascinating, it is the best preparation possible for their futures.

All over the world, parents care for their offspring in different ways. Tibetan babies are carried next to their fathers’ bellies in sheepskin slings. African babies are tied across their mothers’ backs with lengths of kente cloth. Mayan children sleep in hammocks. Japanese children sleep on futons on the floor alongside their parents. Italian infants are fed pastina cooked in milk, while Pakistani infants are fed khichiri, a porridge of rice and black lentil.

What is constant is family love and its expressions. In every country, children and babies are covered, rocked and sung to sleep. As the sun descends in the evening sky, lullabies speak of the moon and stars, subjects at once beautiful, cosmic and drowsy-making.