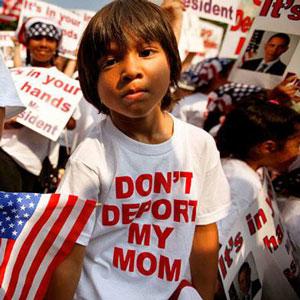 The Applied Research Center report finds that almost one in four people deported is the parent of a United States citizen child. Photo Credit: newsone.com

Some homes become single parent homes for reasons other than divorce or desertion.

According to the New York-based Applied Research Center, the government deported 46,000 parents of U.S. born children in the first six months of 2011 with an estimated 5,100 of those children delegated to foster homes due to such deportations.

This is one of the lesser-told stories about our current immigration policy. What happens to the children – often U.S. citizens – of the immigrant parents that Immigration and Customs Enforcement detains or deports?

“I do think that it’s something that people on the whole are not aware that is happening to the extent to which families are separated in this really traumatic way,” says University of Arizona Law Professor Nina Rabin.

Rabin, director of border research at the University of Arizona (UA), Southwest Institute for Research on Women, and author of the report, “Disappearing Parents: Immigration Enforcement and the Child Welfare System,” which appeared in the November 2011 issue of the Connecticut Law Review. In that report, Rabin describes what happens to some families entangled within the federal immigration enforcement system, which includes long-term stays in foster care for youth whose parents suddenly disappear after either long-term detainment or deportation by immigration.

Rabin, who also directs the Bacon Immigration Law and Policy Program at the UA James E. Rogers College of Law, based her year-long research on more than 50 surveys and 20 interviews with juvenile court judges, attorneys, and caseworkers in Child Protective Services.

Among the disturbing conclusions was the widespread confusion and difficulty of locating parents apprehended by immigration and that “no mechanisms or policies have been adopted, either by the federal immigration system or the state child welfare system, to address these complex cases." Rabin says that in some cases, immigrant parents were systemically denied the same due process other parents receive when their children are in protective custody. The result includes the possibility of these U.S.-born children losing their immigrant parents who face termination of their parental rights because of their inability to comply with the court's timeline due to them being in immigration detention.

According to child welfare personnel surveyed for the report, some immigrant children are too fearful of the government to attend family court for their custody hearings, or undocumented fathers so feared traveling by bus that they were unable to reunite with their children.

Rabin found that this lack of protocol for working with individuals in detention who have children is an issue that is popping up around the country and has wide implications for federal and state agencies. While Rabin’s report acknowledges that no one in government actually advocates permanently separating parents from their young children regardless of the immigration status of the parents, the report concludes that, “such separations are occurring, largely under the radar screen and often without any specific intent by actors within each system for this outcome to occur.”

This is just awful, that this many parents are being taken away from their children. I feel like once you have made it across the boarder, you should be allowed to stay. They go through all this trouble to come over to the states, and pretty much be life or death for them. Then once they get to the states they have to go back, and their children have to stay? This makes no sense to me. What is happening with all the children? Where are they going? Either have the children go back with their family, or have the parents stay. It is not right to break up a family like that.

Wow......reading this just makes me feel so helpless for these kids, and let alone there parents! I can't even image to understand the hardship that is put on these immigrating families. To be taken away from your parents, by the government, because of something like immigration is horrible. The fact that they are being deported is one thing, but the fact that they are being taken away from their children.....heartbreaking. What if they never see them again? What are these kids suppost to think? Who's right is it to determine where the kids go or stay? How does an issue like this not gain more awarness of the public?? If I got taken away from my parents at a young age.....One I wouldn't be who I am today and maybe I wouldn't have even known.... What if these kids never meet there real parents!!? I really hope that someone in government control begins to look at this as an important issue in our country. To take a child away and deport the parents is like taking an infite and placing them on someones porch.....helpless and hopeless.