Celebrating The Mexican Holiday: Day of the Dead 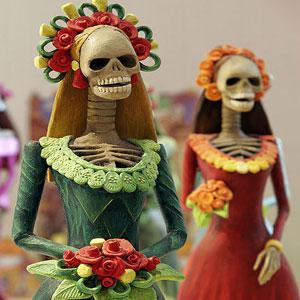 Catrinas are one of the most popular figures of the Day of the Dead celebrations in Mexico. Photo Credit: Wikipedia

On Tuesday, November 1, 2011, the well-known Mexican holiday, Day of the Dead or Dia de los Muertos in Spanish brings together family and friends to remember those who have died. Every year on November 1 and 2, people in Mexico, or towns and cities near the Mexican border celebrate this holiday.

The original ritual celebrated by the indigenous people living in Mexico was likely an Aztec festival dedicated to the goddess, Mictecacihuatl and held in the summer.

The traditions today include relatives and friends visiting graveyards of the deceased and building altars in which they leave food and favors as gifts. The most popular items include sugar, skulls, and marigolds.

In the more rural parts of Mexico, the locals visit the cemetery of loved ones who have died and decorate the tombs with the marigold flowers, candles, as well as toys for the dead children and bottles of tequila for the to adults. Picnic blankets and chairs are then set up next to the gravesites with family and friends having a feast on the favorite food of the dead loved one.

Today’s celebration in Mexico also includes many people wearing wooden masks that look like skulls, and sugar skulls that are left on the grave, in some instances, the name of the dead person might also be written on the forehead of the sugar skull and then eaten by those in attendance.

While the skull might seem like a morbid remembrance, this particular symbol of the dead likely dates back to a time when the Aztecs and other indigenous folks used skulls as the trophies of war. They displayed the skulls during rituals as symbols of death and rebirth.

Why the skull fascination? Unlike in the Christian religions, the religions of the people at that time viewed death as just another part of the journey of the soul and thus, they did not fear death.

Brazil also celebrates this festival calling it Dia de Finados, and in Spain, there are festivals and parades on this day with folks congregating at cemeteries to pray for their loved ones who have died.

Sources:
www.dayofthedead.com
The author’s personal knowledge and participation in Day of the Dead festivities in years past.