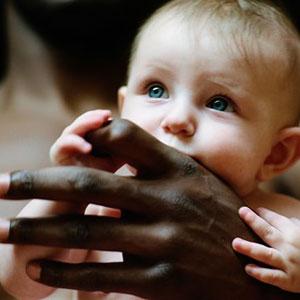 Current data shows that children in transracial homes adjust as well as those adopted by members of their same race. Photo Credit: http://ethiopian-adoption-journey.blogspot.com/2009/11/transracial-bill-of-rights-for-adopted.html

The controversy of adopting children across racial lines is a historical challenge, but the good news is that a study by William Feigelman, and Arnold Silverman on the long-term effects of transracial adoption (futureofchildren.org) found that after six or more years of living in their different-race home, children adjusted as well as their same-race-adoption counterparts.

Nonetheless, some deep divides remain about transracial adoption, such as the National Association of Black Social Workers (NABSW), who nearly 40 years ago, passed a resolution to end adoption across racial lines in the United States. They viewed such adoptions as a form of racial genocide, arguing that children in non-black families could not learn the survival skills required for living in a society whose fabric is torn by racism.

Today, we see a shift — at least in the "consideration" of such adoptions. The results of a National Survey of Family Growth in 1995 found 51 percent of white women expressed a preference for a white adoptee, but up to 87 percent were willing to consider a child from another race. A 2002 survey found 35 percent of African-American women considered adopting an African-American or biracial child, as have 34 percent of Caucasian women, and 31 percent of Hispanic women.

Additional research about the outcomes of trans-race adoptions, particularly that done by Dong Soo Kim, in his study of Korean adoptees by white American families (the most frequent form of transracial adoptions) found no significant difference in self-esteem scores between these children and their American teenage counterparts.

Ann Costello, executive director of a family foundation, and her husband, Anthony Ciaccia, CEO of a textile printing company, have first-hand experience with Korean adoption. Their son James, whom they adopted as an infant, is now heading off to college. James' says, "“I really don’t have a problem with adoption. It’s not all that uncommon. Our family has always been so open about it, which is good; it’s so integrated or ingrained in me; it’s not news; it’s who I am."

Costello notes that people often say that James is fortunate to be in their home, to be in America. In fact, she says, "It's just the opposite - we are the lucky ones; James completes our family and fulfills our need to parent and nurture a child.”

"We learned to be patient with people," she adds, "and to turn their 'interesting' questions into teachable moments. For example, we were asked (several times over the early years) if we needed to learn the Korean language to communicate with James, who came to us at the age of three months. As ridiculous as this sounds, we realized people/friends don’t have much experience with international adoptions so we had to educate them on basic things.” 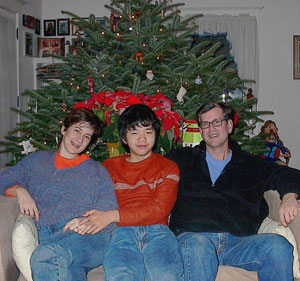 "While on the one hand," she acknowledges, "we are somewhat of a novelty with a Korean child, the flip side is the fact that families today come in all shape and sizes; families are constituted and re-constituted in a number of ways so we’re not the odd family out, which probably makes things a little easier for us. (Unlike when I was adopted in 1954).”

"It was/is our experience that people / schools / communities / neighbors tend to lump James into two categories — Asian and Chinese. When he started at The Harley School in eighth grade they began recognizing him as ‘James from South Korea,’ which is something he very much appreciated.”

Ann and her husband talked with James about his adoption right from the start. "As early as we/he can remember, we watched his arrival video; celebrated arrival day; thanked God and our lucky stars he found his way to our home; and together we thanked/acknowledged his birth mother (in spirit/prayer) for making a very difficult decision out of love for her son."

She adds, "There are wonderful children’s books on international adoptions that were helpful, hopeful, and age-appropriate. These became our favorite books at bedtime. Asian children were well represented in literature so James could see similar children in his books.”

"I’d call our approach one that was/is appreciative and supportive. We never pushed him to 'be Korean,' but rather let him set his own pace and the extent to which he wanted to be involved. So, over the years we frequented Korean cultural events in the community for exposure; he enrolled and practiced Tae Kwon Do (Korean martial arts) for many years where Master Kim became an important role model; and he grew to love Korean food. We are regulars at local Korean restaurants – so much so that they know his order and always give him extra kimchi! He knows a little of the language and some day we plan to visit South Korea as a family. James has always expressed an interest ‘to go to my home country,’ which we encourage and embrace.” 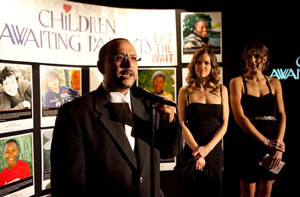 Mark W. Soule, Executive Director of Children Awaiting Parents (CAP) in Rochester, New York, has also had first-hand experience with the pro's and cons of transracial adoptions. Not only is he an African-American adopted by a white family, he also heads an organization that seeks to place children from a wide range of backgrounds. He acknowledges the pros and con's of both sides of the transracial issue, but stresses that CAP's goal is to find homes for children who have waited the longest in the foster care system nationwide.

He says CAP works to bring families into the adoption process and adds, "Adoption always will be about finding homes for kids rather than finding children for parents."

On trans-race or trans-cultural adoptions, he acknowledges the complexity of the issue: "Ultimately, we believe that finding homes is the most important thing. For decades, there was no recruitment in the African-American community to find homes for African-American children. We believe passionately that while a family should never be ruled out because of race, the adoption community needs to focus efforts on finding parents of kids of the same race." (Children Awaiting Parents was founded by Soule's mother, who served as the executive director for 30 years. She adopted five children into what he describes as a "smorgasbord family).”

There is always preparatory work to be done when adoptions occur. In Soule's words, “We do not place the child in the home. We take families that are ready and the children and make the connection. New York State families adopting through foster care organizations like ours have to go through a 10-week learning process. Often, they will 'weed themselves out' if they learn they are not prepared for this. There is homework. Families need to have in-depth conversations about how their lives will change.” 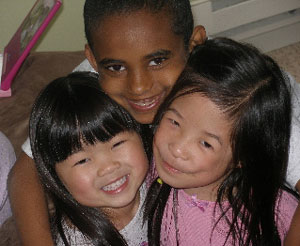 "The process can be uncomfortable," he notes, "but is essential. When I was adopted in the late 60s, my adoptive parents were lucky to have friends who told them, 'Being smart is not enough. You need people like us to be in your son's life. Your son needs to realize that if he is ever in trouble with the police, he should never run.' (Soule observes, "Statistically, a black man is more likely to be shot if he runs than a white man).”

Other ramifications might include family members of the adopted child who might disagree with his or her placement. He was fortunate, though: "I had all sorts of people in my life that played all different roles. The laws say you cannot use race as a reason not to adopt. Placing children will always be the most important thing for us at CAP."

Hans Christian Andersen noted that life itself was the most wonderful fairy tale of all. Living proof of that wonder is the story of Michael Oher, the black teen adopted by the Tuohy family of Memphis. The story, of course, became the movie The Blind Side, produced by Molly Smith.

In a wonderful turn of events, Smith contacted CAP, invited Soule and an associate to Hollywood, and held a red-carpet fundraiser for them. She and her business partner Hilary Swank continue to support CAP, including sitting on their board. Soule notes there are 80 million people that inquire about adoption each year. "If just one in 500 said, 'I will adopt from foster care,' we would have no waiting children."

We also have to look at the bonds that unite us in families and the family of man, despite the differences in race or culture. Take the child of a black man, raise him in a white family, transport him 10,000 miles for adoption by a Southeast Asian father and immerse him in that culture when he is six-years-old. Return him to America, and what do you get? President Barack Obama — a man who speaks for all the people comprising the mosaic that is America.

I have had mixed views on this, but after watching a video on adoption a little while ago I have come to a decision as to what I believe. As it is known, people who are in mixed race relationships tend to have problems with people judging them. What goes along with this is that kids could be judged for not having parents of the same race, as well as the kids missing out on their own cultures events. However, what has changed my mind is the fact that so many kids sit in the social system with no parents, which is definitely not beneficial to their mental health, as they often feel that they are not loved. So, even though these kids may be missing out on some things (which they would anyway, because they are not with their biological parents), atleast they are being adopted by people who are ready to care and love on them. There are going to be trials in any adoption, whether it be mixed race or something else, so why not take the kids out of the foster system and at least show them love and acceptance.