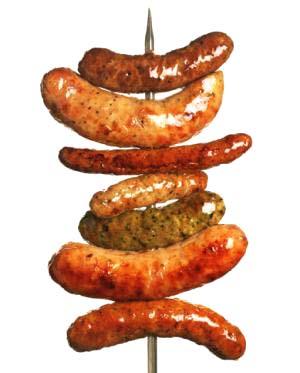 From Poland to Portugal, Switzerland to the Philippines, sausage is a culinary mainstay in cultures across the globe. Taken from the Latin word salsus, meaning ‘salted,’ sausage has a millenniums-old tradition. Many people believe the first sausages were invented in today’s Iraq, around 3000 B.C., and the Chinese made goat and lamb sausage as far back as 589 B.C.

Sausage was frequently consumed during the pagan Lupercalia Festival of ancient Rome until fourth century emperor, Constantine—along with the Catholic Church—banned sausages because of its pagan roots.

Traditional sausage making was primarily a food preservation technique that employed curing, drying or smoking. Sausage is still typically made from ground meat, animal fat, salt, herbs, and spices. Traditional sausage casings were made from animal intestines but casings may also be made from collagen, cellulose, or plastic, today.

Residents of the United Kingdom and Ireland eat more than 400 pork and beef sausage varieties, most of which are served at breakfast. Modern varieties sometimes feature unusual ingredients including apples or apricots. Germans make more than 1,200 types of sausage including raw and dried, brined, and smoked varieties. Jagdwurst are cooked sausages, and blutwurst is pre-cooked meat, sometimes combined with raw organ meat. However, bratwurst is perhaps the most familiar German sausage, in the United States.

Bill McBee, owner of McBee’s General Store in rural Amsterdam, MO, handcrafts 20 flavors of bratwurst and sells 200 German bratwursts per week. He creates these tasty sausages from pork butt, and cushion meat that is taken from the front shoulder of the pig. This process adds a leanness similar to that of a boneless picnic ham. In addition to secret seasonings, McBee adds sage, granulated garlic and crushed red pepper to the meat. The family hand twists the natural pork casings.

“I learned how to make [bratwurst from a man] in 1977, in Hermann, MO,” Bill says. “He told me that ‘brat’ actually means little—like little kid—so bratwurst means little sausage. They would often cook sauerkraut and new potatoes with brauts, in a Dutch oven, on top of the stove.”

Chorizo, another form of sausage, has Spanish roots. Margaret Saucido makes chorizo from a fourth generation Spanish recipe at her Albuquerque Company, Chalita’s Chorizo named after her mother. “Area chefs [call it] ‘white tablecloth chorizo,’” Saucido says. “We use beef chuck and pork shoulder, chile powder, paprika, cumin, garlic, black pepper, coriander and oregano, and tequila instead of vinegar, which expands the molecules of meat and seasonings.” (Chalitas is the only U.S.D.A-inspected company that makes, and vacuum packs, chorizo)

Although they’re best known for winemaking, the Seghesio family makes 2,000 pounds of Italian sausage at the beginning of each holiday season.

“There’s nothing like a piece of fresh sausage on fresh bread, with a glass of Zinfandel, at 10 o’clock in the morning after the vines have shut down,” says CEO Peter Seghesio.

Seghesio grew up with the Northern Italian recipe, which uses Boston butt meat, with approximately 10 percent fat blended back into the sausage ingredients, because hogs are leaner than when his grandmother made sausage.

Salt, pepper, clove, nutmeg and allspice flavor the meat, which the Seghesio clan stuffs into each hand-tied casing. Risotto often accompanies the annual sausage feast. Fresh polenta, with sausage and chicken-studded tomato sauce, atop teleme cheese, is another family favorite.

Additional Italian sausages include cooked and cured salume, while French saucisson and Chinese lap cheong are other types of dried pork sausage. Swedish falukorv combines ground pork with mashed potatoes. However, not every cuisine emphasizes pork. Icelandic sausage includes lamb and Turkish sosis is made from beef. South African boerewors combine game and beef with pork or lamb, coriander and vinegar.

For personal reasons, McBee, Saucido and Seghesio won’t share their sausage recipes. However, whether made at home with grandmother’s recipe, or purchased from a professional sausage maker, this savory and satisfying food plays a major role in the world’s culinary traditions.

The cooking of Mantova (Italy), heavily reliant on spices, tends toward sweetness. It’s the cuisine of the nobility appropriated by the middle class. This sausage marries well with past and Broccoli de rape, vegetable soups, and tomato sauce. It’s also good just grilled and served as is.

The pork should be ground at a ½” setting.

In a bowl, blend all ingredients well except the sausage casing and refrigerate overnight. Stuff the washed and dried casing, tying the sausages off at 4” intervals. Refrigerate until ready to use.

To learn more check out the following books:

Johnsonville Big Taste of Sausage Cookbook: More than 125 Recipes for On and Off the Grill from America’s #1 Sausage Maker by Shelly Stayer & Shannon Kring Biro, Broadway Books, June 2006