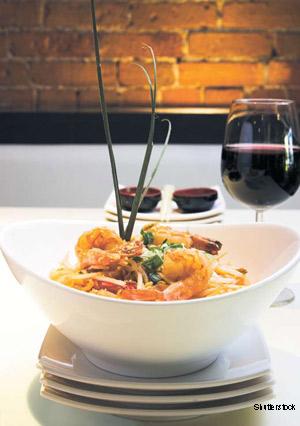 Served cold or hot, sauced or buttered, with vegetables, meat, dairy, or with broth, noodles are integral ingredients of ethnic cuisines all over the world. They are inexpensive — one pound of dry noodles equals roughly two pounds of cooked noodles — and versatile. They complement almost all other foods, and are an essential comfort food in nearly every culture the world over.

In English, “noodle” is a generic term for the unleavened dough used to make the noodles in countless shapes. The terms noodles and pasta are usually synonymous. While durum semolina wheat flour is the key ingredient in most traditional noodles in Western countries, Asian cultures have long created noodles using rice, potato, and bean starches. In recent years, American pasta makers have taken a cue from other cultures and gone beyond traditional wheat flours to create noodles made from whole wheat and whole grains.

In 2005, a 4,000-year-old bowl of noodles was unearthed intact in China. However, according to Gregg Piazzi, director of culinary operations for P.F. Chang’s China Bistro, it has actually been 5,000 years since Chinese people began making noodles as a way of preserving grains they had grown for use throughout the year, A constant culinary staple in Chinese culture, long noodles are said to represent long life.

Versatile, comforting, and cheap Noodle-based sweet and savory kugel dishes have been a German staple for more than eight centuries, with varieties of this dish adopted in Poland, Hungary, and among members of the Jewish faith. In southern Germany, Austria, Switzerland and France, spatzle — egg noodle — dishes often accompany meat entrees, accented with sauce or gravy.

The versatility of noodles makes them an ideal platform on which to pile high indigenous foodstuffs. In northern Italy, where residents raise plenty of livestock and minimal crops, sauces often incorporate butter, cream, cheese, and meat.

Italians who live near the sea frequently incorporate fresh fish and shellfish in their pasta dishes. Japanese noodles require many ingredients, such as buckwheat for soba noodles, which they use to punctuate hot soup. Udon wheat noodles often appear in soup too, topped with poached eggs, rice cakes and tempura. Korean cuisine also favors buckwheat and wheat noodles in soups.