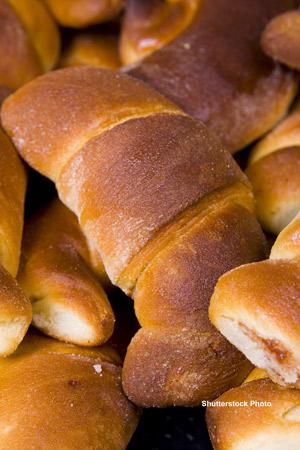 My grandfather passed away when I was nine years old. Though certain memories of him run the risk of losing clarity, others are snapshots in the back of my mind. I can see him eating handfuls of peanuts while he watching football games with my father. I can recall his white cotton shirts and the softness of his skin. I remember the stories he told me while I sat on his lap as a young girl. I can still see his remarkable grey eyes that held wisdom and wonder. A man of gentle strength, my grandfather left behind a family heirloom that will forever keep him alive in my heart.

Faded and worn, on a thinning piece of paper, is my grandfather’s recipe for buttermilk rolls. Written in delicate loops of cursive, it lists every measurement and preparation, from how the dough must rise to baking the bread just enough to give it a crisp, golden brown edge. I still remember the rolls, served in a paper-lined basket or resting on a plate filled with collard greens and fried chicken. I remember the taste. Before my grandfather’s passing, his rolls were a staple at all Thanksgiving and Christmas gatherings. Light as air. Sweet as heaven.

African-American families know the virtue of preparing a meal with love and care. Beyond the enticing aromas, and comforting presentation that goes into setting the family table, there is the grace of tradition. My grandfather deeply believed in tradition.

In the years that followed grandfather’s passing, my family began a new tradition that has held strong to this day. We all received a copy of the cherished recipe. We made an agreement to use a recipe to try to create the closest version possible of grandfather’s rolls. My uncle Walter became the “bread winner” of the re-creations. They did not quite capture the complete essence my grandfather creations, but they were a close match. Sweet, tender, and leaving your taste buds pleading for more. It was a humble start.

I brought my rolls to the family dinner regardless. My family praised me for trying, claiming they were not far from the real thing. However, I am sure their encouragement was a bit overzealous, although it was appreciated. The entire family agreed that no one could duplicate Grandpa’s recipe. We had all come to the same conclusion; despite our best efforts, it might be possible that grandfather may have omitted an ingredient or two in his written recipe. On purpose?

The best chefs never give away their culinary secrets. If my grandfather left a secret ingredient out of his written recipe, I do not believe it was to remain the sole champion of a family favorite. I do believe — knowing his love of family and the value of tradition — that it was his way of making sure that, when the day came that he could no longer sit down with us at the family table, he would somehow be present. I believe that every time we try to perfect his rolls, we are holding on to his memory and becoming closer as a family. A bond defines our family’s pride, patience, and preservation. When it came to my grandfather, it truly was all about family.