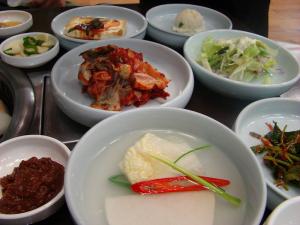 America, called a Melting Pot to explain our immigrants from all over the world, is also an explanation for the variety of racial and ethnic cuisines we enjoy.

When my family emigrated from South Korea to rural Wisconsin, I didn’t understand why kids at school kept asking me what kind of food they ate in China. How should I know? I had never been to China. I had been to Japan once, on vacation with my parents, but the only food I remembered from that trip was the spectacular cart of whipped-cream-covered cakes wheeled in every day by hotel room service.

It turned out we had landed in a solidly old-fashioned German-Scandinavian-Swiss farming community, where issues of race and racism were not at the forefront of our little town. A town so small there were no fast-food places – indeed, very few restaurants at all. For the occasional Saturday night treat, we went to the pizza place owned by Phil, the town’s lone Greek. So I grew up believing that pizza was rectangular in shape, strewn with feta, olives, and lamb sausage, drizzled with olive oil and served in little squares.

In 1970s America, the food we ate at neighbors’ houses and church suppers was no more to be seen on television or in the pages of “Good Housekeeping,” than the Korean food my mother continued to prepare for our family, procuring most of the necessary ingredients on bulk-buying trips to Korean grocery stores three hours away in Chicago. For the rest, she sprouted mung beans on the kitchen windowsill, made her own tofu and grew Korean varieties of peppers, leaf lettuces, and radishes in our garden, next to the corn and the tomatoes.

When I landed in New York City as a college student, the myriad of unfamiliar cuisines I encountered for the first time were as much an education to my unschooled palate as was any academic course. The latkes and chopped liver of Eastern European Jewish cooking; spongy sour injera, and spicy wats of Ethiopian cuisine, smoky baba ghanoush and lemony stuffed grape leaves of Middle Eastern fare; fluffy couscous and fruity tagines of Moroccan; paté de campagne and bouillabaise; osso bucco and pappardelle; sushi and yakitori; and not generic Chinese food, but bona fide Hunan, Cantonese, Shanghainese, Szechuan, and Fujianese varieties – it was an amazing explosion of new and delicious ingredients, aromas and tastes.

I became an enthusiastic student of the hundreds of ethnic restaurants and stores in every neighborhood of New York City, learning the nuances of Swiss versus Israeli yogurt, Afghani versus Pakistani flatbread, Jamaican fruit bread versus Italian pannetone, and the differences between Malaysian, Thai and Punjabi curries.

Twenty years later, when I moved back to the Midwest, I looked forward to a simpler way of life for my children, but dreaded the return to a culturally-limited diet. To my delight and surprise, the cultural diversity and the wealth of larger cities like New York City and Los Angeles had spread coast to coast. Our mid-sized city in the very heart of the country now boasts very good Middle Eastern, Ethiopian, and Thai restaurants among others, as well as a surprisingly broad and deep selection of ethnic food shops, from Vietnamese to African, Indian to Russian.

The local supermarket offers not only a long aisle stocked with every conceivable Mexican food product and tortilla, made fresh daily, but also locally produced mozzarella, hummus, and labneh. The closest Korean grocery is five minutes away, and I can find just as easily the ingredients for authentic Italian, Polish, Moroccan, or Senegalese meals.

Our culinary horizons expanded with our national consciousness of our diversity. Alongside our country’s wonderfully distinctive regional traditions, new culinary menus are entering the mainstream every day. In addition to the established strongholds such as Chicago’s Polish community and San Francisco’s Chinese, there are now Thai restaurants in Memphis, and Moroccan restaurants in Des Moines. Some of the best Vietnamese restaurants in the country are in Houston, excellent Lebanese in the Mississippi Delta, and superb Ethiopian in Washington D.C. As ethnic and racial groups have spread around the country, following jobs and schools, they have taken their foodways with them and shared them with new friends. And as it always does, food brought people together.