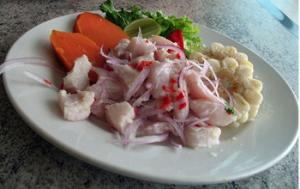 Peruvian Ceviche is made many different ways depending on the kitchen, but there will almost always be fish or fish mixed with shrimp used along with lemon, onions, celery, cilantro, salt and black pepper. Photo Credit: pura-aventura.com

If you have never visited Peru, you might not know the pleasure of a good Peruvian meal. In fact, Peruvian cuisine really is one of the best kept secrets around. While there are a number of restaurants scattered around the United States that offer this cuisine, making Peruvian favorites at home can be quite simple.

Peruvian food is heavily influenced by the diverse cultures that play parts in the country’s rich history. From pre-Incan and Incan to Spanish, African, Chinese, Japanese and Italian, traditional dishes pull from a large catalog of ingredients that were embraced by the different people making the country their home.

Some of the ingredients that are often found in Peruvian dishes include rice, potatoes, corn, quinoa, tubers, rice, and wheat, the latter of which was introduced to the country by the Spanish.

Spiciness is commonly found in Peruvian dishes, which liberally use chili peppers. A common pepper found in Peru is the aji pepper that provides plenty of heat to those who seek it.

One Peruvian recipe that most people will recognize is called ceviche. While ceviche is made many different ways depending on the kitchen, there will almost always be fish or fish mixed with shrimp, along with lemon, onions, celery, cilantro, salt and black pepper.

1 habanero pepper, seeded and chopped or you can use the Peruvian Aji

8 to 12 limes that are freshly squeezed and strained.

Combine the ingredients together and mix except the red onion;

Put the red onion on top of the mixed ingredients and let it marinate in the refrigerator for three hours;

Mix well and serve with corn, avocado or cold vegetables.