The Unique Flare Of Tibetan Food 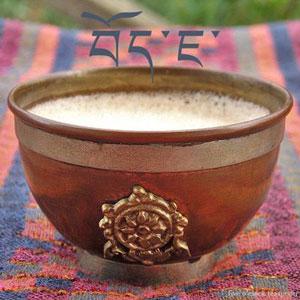 With travelers visiting the Himalayas and Nepal often these days many are interested in Tibetan cuisine, which has its own particular flare, but has also been influenced by its neighbor India. Using many indigenous ingredients in the winter, beef and mutton are popular on the table. The meat is cut into long strips and has normally been air-dried in ground caves for longer preservation. The dried meat is then eaten raw or barbequed.

Often the meat is also boiled and seasoned with salt, ginger and spices. Meat is taken from the dish by hand and cut with a knife, which is a utensil carried by every Tibetan. The breasts and spareribs from the meat are always saved for guests. The tails of the white sheep are saved for the guest of honor at the meal. For example, if a man is having dinner at a girlfriend’s home and he is served the tail, this means there is hope he might be able to marry her.

The staple food in Tibet is barley flour called tsam-pa and folks eat this daily. Made from roasted barley, and ground with a hand mill until it becomes a very fine consistency of flour. It is then mixed with tea and rolled into a small lump with butter, curd and sugar added for flavor.Tibetan butter is homemade too and is not only used for eating the tsam-pa, but also for fuel in lamps.

Tea is popular in Tibet and there are three ways to make it; simple tea, milk tea, and butter tea. The leaves of the tea are Fu Tea from Hunan, Tou Tea from Yunnnan, and Ta Tea from Szechuan, and Tibetan tea drinking is a special culture and very important in Tibet.

Mixing: One churn, blender, or large drink container with a tight lid. Use any kind of milk you want, most Tibetan people who live outside of Tibet use Lipton tea, or some kind of plain black tea. This po cha recipe is for two people -- two cups each. Bring four cups of water to a boil. Put two bags of tea or two tablespoons of loose tea in the water and let steep while the water is boiling for several minutes. Add a quarter of a teaspoon of salt. Take out the tea bags or if you use loose tea, strain the tea grounds. Add a third to a half cup of milk or a teaspoon of milk powder. Pour the tea mixture, along with two tablespoons of butter, into a chandong or large container with a lid and shake the tea, or use a blender. Blend or shake the mixture for two or three minutes and note that it tastes better the longer you blend it.