Vietnamese Dim Sum: A Classic Experience For Everyone In The Family 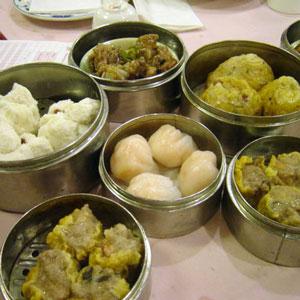 Cultures all over the world prepare dim sum as part of their daily meal Photo Credit: http://phoboy99.files.wordpress.com/2007/09/dim-sum.jpg

While dim sum is found all over Asia, including Vietnam, the word, and the tradition originally began as a type of Cantonese cuisine; a number of small dishes served with Chinese tea. Meaning, “To touch your heart” the closest comparison in the west to dim sum is hot and cold hors d'oeuvres.

According to www.dimsum.co.uk whether it is rice porridge called congee or juk, fried noodles and rice also served with different types of dumplings, steamed meat, seafood balls, buns and endless other varieties of small, light dishes, the food will always be served steamed, baked, fried or grilled. It also always comes in small portions with three or four pieces per serving.

Dim sum is served anytime from 5 a.m. until mid-afternoon on most menus, but Sunday in Asia is the most popular time to partake.

The typical tea served with dim sum, which is still a very important part of the dim sum custom, includes chrysanthemum, green, oolong, or puer tea.

A note on ordering dim sum, often you won’t order it from a menu. Instead, it’s all about choosing from a variety of dishes offered from a pushcart. On the cart, the lighter dishes come first, then the more non-traditional (at least from a western standard) like chicken's feet followed by the heavier food and then dessert.

The dim sum tradition actually began many years ago in conjunction with the Asian art of tea tasting. Originating on the Silk Road where travelers would stop at teahouses to take a rest, the dim sum was additionally enjoyed by travelers.

Directions:
Shell prawns, leaving tail unshelled. Slit prawns halfway lengthwise and remove dark veins. Season with 1 tbsp. ginger juice, a pinch of salt and a dash of pepper. Set aside. Combine ingredients B in a bowl and mix until well blended. Let stand for 5 minutes. Heat oil in a wok. Dip each prawn into batter and fry until light golden brown. Remove to absorbent paper to drain oil and place on a serving dish. Arrange cucumber and tomato slices around edge of plate and serve.