Sake: The National Drink Of Japan 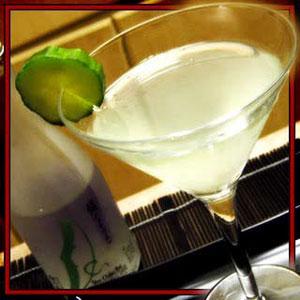 Saketini, a favorite for many in Japan.

Sake, the national drink of Japan is a rice wine originating from the 3rd century BC, when local villagers invented the drink.

With 40 sake breweries in Chiba Prefecture, located just outside of Tokyo, it is easy to incorporate a sake tour into day trips from the capital. Of the 40 breweries, half were established during the Edo period (1603-1868), with the other half founded in the late 19th century.

The oldest known brewery still in existence today is the Yoshizaki Brewery, which was founded around 1630 in the Kururi area of Kimitsu City. Kururi is famous for being the seat of power of the Satomi Clan, and the town developed around the castle.

The next oldest brewery is Terada Honke Brewery in Katori City and the third oldest is the Nabedana Brewery in Narita City.

Masako Masuzawa, a government employee for Chiba Prefecture in Japan, says, “The breweries that started during the Edo period were gathered around the active castle towns, temple towns, and riversides, but the most appealing spot for them was the transportation center that the Tone River basin provided. In those days water transport played the leading role in trade, so breweries sprung up one after another from Choshi to Sawara, now Katori City.”

Today, in Chiba Prefecture most of the breweries are in the Kanto area because there is always suitable rice and clean water to make the highest quality sake.

If visiting breweries near Tokyo remember that sake brewing usually starts in November and ends in April, with December and January being the busiest months. Here are three of Japan’s most popularly visited breweries, all easily accessible by train.

Yoshino Shuzo
Yoshino Shuzo is a family-run brewery founded in the early 1800s in Katsuura, the southern part of Chiba Prefecture. The brewery offers tours in English and was one of the first to promote sake in the United States, venturing into the U.S. market in 1997.

The brewery sells about 20 varieties of its Koshigoi brand made by its “toji” (brew master) and six “kurabito” (workers), who come down from Iwate Prefecture in the winter to brew the sake while the farms in their hometowns are idle. Koshigoi’s sake has a light flavor because the water, drawn from a nearby reservoir, is soft, or contains less chemicals and minerals, according to Yoshino. In 2002, All Nippon Airways featured the brewery’s high-quality “daiginjo,” made from rice polished to the core to create a pure taste, on its first-class menu for six months.

Ozawa Shuzo
Established in 1702, Ozawa Shuzo, located in mountainous Ome in western Tokyo, utilizes a well that provides an abundant amount of hard water, which the brewery mixes with soft water from a local spring.

Ozawa Shuzo’s Sawanoi brand is light and dry, which allows it to complement the salty cuisine popular in Tokyo. In recent years, the brewery has worked to make richer-tasting sake with a unique flavor. The brewery, built near the upper reaches of the Tama River, offers guided tours four times a day starting at 11 a.m. Although the guides only speak Japanese, there are English brochures that explain the brewing process to the non-Japanese speakers, who frequently trek from central Tokyo and other places to sample its products.

Ozawa Shuzo’s main export to the West is Daikarakuchi – literally “very dry taste.” But its apricot-flavored sake is quite popular with foreign visitors.

Ishikawa Shuzo
The Ishikawa family has been living in the western Tokyo area, now known as Fussa, since around 1600. They began making sake in 1863.

“At that time, this area was not fit for rice farming due to the frequent flooding of the Tama River,” says Taro Ishikawa, president of Ishikawa Brewery Co., “but after our ancestors built a bank in the 1850s, we were able to cultivate rice.”

That rice along with water pumped from underground are the two main ingredients of the firm’s Tamajiman sake. But the brewery now uses various types of rice specifically grown for sake production, including Gohyakumangoku, and also brews beer.

Visitors to the brewery can visit five traditional storehouses, or “kura,” built in the 19th century and a 230-year-old gate. Both are designated as tangible cultural properties. U.S. service members from the nearby Yokota air base often come to the brewery to dine at its “soba” buckwheat noodle restaurant, and another eatery where visitors can find the brewery’s beer, Ishikawa said.

This year, Ishikawa plans to hold a lecture on sake in English for non-Japanese speakers, and says the brewery intends to hold these lectures three to four times a year.

Preparation: Into a mixing glass filled with ice, pour the sake, vodka, and gin. Stir vigorously to ensure the contents are well mixed. Pour and strain into a frosted martini glass. To finish, arrange the cucumber onto the rim of the glass. This recipe is from www.martinirecipe.net.