Chilean Cuisine: A Taste Of Simple And Natural Fare 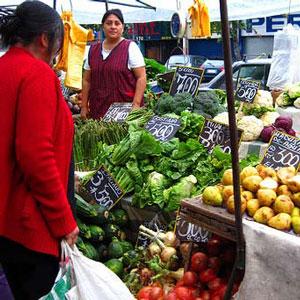 As winter continues Americans must find fruit and veggies in the local supermarkets.

As the cold of winter continues, our kitchens in the U.S. are full of warm, slow-cooking foods like stews and casseroles. The season of fresh fruits and vegetables from our gardens and local farmers markets has not yet returned, so we turn to root and cold weather vegetables, as well as supermarket vegetables imported from warmer climes. As we snuggle in for the final months of cold weather, it’s nice to imagine those living in warmer places and to experience some of the things they eat at this time of year.

Chile is a big importer of winter fruits and vegetables to the U.S. The country of Chile, located along the southwestern coast of South America, is a narrow strip of land with over 2,500 miles of coastline. Nestled between the Andes Mountains and a smaller mountain chain that runs along the coast is a fertile valley where agriculture flourishes at this time of year.

My daughter’s second-grade teacher, Maestro Luis Melo, came to the U.S. with his wife Jeannette Tilleria and their children from Concepción, Chile. He was kind enough to sit down with me on a chilly afternoon to share his recollections of what Chileans would be eating at the height of their summer season.

Chile features a cuisine that’s both fresh and simple, and Melo’s favorite summer foods reflect this trend. Food in Chile is cheap, especially in summer when fruits and veggies are everywhere. Chile is renowned for its wine, but many Chileans also drink teas, coffees, and sodas for the children. For Chilean menus, the key is simplicity, although many of family customs reverberate around traditional recipes.

During the warm summer months, Chileans dine on fresh fruits and salads. Unlike salads typically served in the U.S., Chileans favor a more simple fare, perhaps lettuce with a little bit of salt, and some lemon juice squeezed over the top. Another favorite of Melo’s is tomatoes served fresh with a little bit of oil and salt.

Chileans purchase fresh fruit at the open markets every Sunday. According to Melo, a typical family will spend no more than $30 for whole week of fresh fruit and salads. He recalls being able to buy a large watermelon or 20 kiwis for a dollar. The reason they use lemons so much in Chile is that they are cheap at eight for a dollar.

With Chile’s vast coastline, seafood is big part of their cuisine. Melo remembers eating seafood mostly on the weekends. As he explains, “Sundays are a big day to go as a family and eat seafood in a restaurant by the sea.” His favorites include fresh mussels eaten raw with lemon and another dish called Ceviche, consisting of raw seafood chopped with onions and celery. In addition to an abundance of fruits, vegetables, and seafood, Chileans are also large consumers of bread.

Melo tells of visiting the local bakery every morning to buy bread and sometimes several times a day. When eaten hot from the oven, they often serve the bread with butter. In summer, they commonly eat it with cheese, tomatoes, and/or whatever vegetables are in season. Chilean cheese tends to be much softer than American varieties. Melo remembers as a kid cutting off pieces of cheese from a large wheel stored in the kitchen, softening it in coffee, and then spreading it on bread.

Chilean tortillas, considered a traditional fare, are simple to make with water, flour, salt, and baked in ashes. Melo says this special bread is hard on top, soft in the middle, and remembers his family traveling 40 miles to buy it.

In Melo’s community, BBQ was also another popular summertime meal. In Chile, the BBQ was different, consisting only of meat and salt, without all the heavy sauces. He remembers inviting friends and family over on Fridays and staying up until 4 a.m., with everyone just eating and eating. He recalls fondly the Chilean custom of his family making traditional recipes in bulk together for everyone to share during a big family meal. 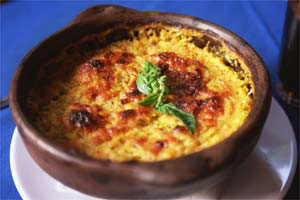 Summertime foods in Chile reflect all the richness Chile has to offer at this time of year, in terms of the region’s abundant agriculture and ample access to the riches of the sea. As we up here in the Northern Hemisphere hunker down with yet another bowl of soup, it’s nice to think about those down south, spreading some soft cheese and piling fresh tomatoes on a piping hot hunk of fresh bread.

Season chopped meat with salt, pepper, ground garlic, and cumin, and set on the stove to fry. Add onions and raisins. Allow to cool for 10 minutes over gentle heat. Wash chicken and drain. Chop and season. Brown in a pan with hot oil for 20 minutes. Chop the corn in grinder, or grate. Mix the purée with milk. Season with salt and pepper. Coat with butter four individual ramekins and put a layer of corn puree in each one. Add a portion of chicken, olives, and finally cover with corn puree again. If you prefer, you can sprinkle sugar over the top. Put it in a hot oven for 25 minutes to roughly simmer and then another 15 minutes over high heat. Serve immediately in hte same ramekin.