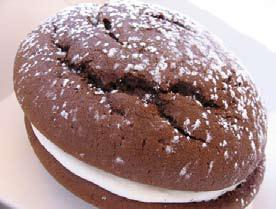 When traveling to far off lands or just the East Coast of the U.S., encounters of culture and food awakens the taste buds and the senses. On the wholesome farmlands where buggies and traditional attire reign in the Amish landscape, whoopie pies are as intriguing today as they were many years ago, before electricity, automobiles, and checking accounts. The Amish prefer to travel on the horse-drawn buggies, plow farmlands without motorized equipment — the stricter the Ordnung, the more traditional the Amish community. With a people so centered on modest means of farming and community, it is baffling that the Amish sell such a peculiar commodity known as a whoopie pie.

The shapes, colors, and sizes of cookies are just as unique as the cultures that generate the mouth-watering morsels. The whoopie pie is just as distinct, and the cookies’ founding culture — the Amish — is like stepping back in time. Although referred to as a pie, the handheld whoopie pie is two tiny cakes bound together by icing.

When exploring the origination of most foods, the story begins in the past. With the whoopie pie and the Amish, the past is the heart of the culture, prospering side-by-side with the modern world. The unique story of the whoopie pie is that the past is present today.

The whoopie pie’s origin is embroiled in controversy since the Amish in Pennsylvania, Maine, and Massachusetts claim to have discovered the whoopie pie, which all began several decades ago in the 1920s with several commercial shops selling whoopie pies during the Great Depression. In 1925, Labadie’s Bakery in Lewistown, MA, started selling the pies, with Boston’s Berwick Cake Company following close behind in 1926. In Pennsylvania, Harris & Boyar Bakery in Morrellville asserts they were the inventors of the creamy centered pie. The Amish whoopie pies, much smaller than their New England cousin, look more like a cookie than a cake.

Even the name, whoopie pie, finds itself amidst debate. Two stories attempt to explain how the pie achieved the “whoopie” distinction, but both share some resemblance. With little wasted during the Depression, people salvaged the leftover cake batter and fashioned it into cookie size cakes. However, stories on how they coined the term “whoopie,” differ at this point. In one story, a cook exclaimed, “whoopie,” when he discovered that using leftover batter created a smaller snack. In Amish tradition, children gleefully cried, “whoopie” when they discovered the treat in their lunches. While we may never know the true origin of the name or snack, one portion of the hazy history includes how they tacked pie to the end of the gobs of the snack. During the 1920’s, most cakes baked in pie tins with the names cake and pie, swapped regularly.

The Pennsylvania Dutch continues to invent a diverse flavor of whoopie pies. In central Pennsylvania, a sale in Belleville held every Wednesday offers locals and traveling tourists a taste of the Amish whoopie pies, traditionally chocolate with a fluffy vanilla center.

However the bins in Big Valley offer chocolate whoopie pies with either a regular white or peanut butter filling, but there are many varieties including, chocolate chip, plain vanilla, pumpkin, spice, and banana.

Take some time to experience these moist chocolate cookies smothered together with the white filling, it is an ideal way to explore and honor Amish culture.

Ingrediants:
4 cups of flour
2 cups of sugar
2 teaspoons of soda
½ teaspoon of salt
1 cup of shortening
1 cup of cocoa
2 eggs
2 teaspoons of vanilla
1 cup of buttermilk (or sour milk; add one
teaspoon of vinegar to one cup of milk)
1 cup of hot water

Preparation: First, cream together in a big bowl sugar, salt, shortening, vanilla, and eggs. In a separate bowl, sift flour, soda, and cocoa together. Add the sifted mixture to the creamed mixture alternately with water and milk. If the milk is not too thick, add slightly more flour. Drop mixture by teaspoon on cookie sheet. Bake in oven at 425 degrees for 4 to 5 minutes. Take whoopie pies out of the oven just before completely done for a softer cookie. Do not over bake. Allow the cookie sheet to cool for a few minutes before removing the cookies.

Filling: Cream together 3 teaspoons of flour, 1 cup of milk, and 1 cup of Crisco. Thicken filling with 1 cup of 10xsugar (confectioner’s sugar). Spread filling on cookie. Place another cookie on top and enjoy!